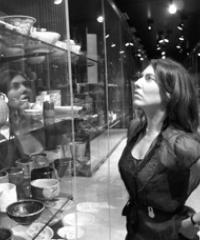 Alicia Volk's research and scholarship address a range of mediums and critical issues in Japanese art from the nineteenth century to the present, including its relationship to the arts of Europe, the United States and Asia. Her In Pursuit of Universalism: Yorozu Tetsugorô and Japanese Modern Art (University of California Press, 2010) places early twentieth-century Japanese painting in the framework of global modernism. This book was awarded the inaugural Phillips Book Prize of the Phillips Collection Center for the Study of Modern Art. She is now working on a manuscript titled Democratizing Japanese Art 1945-1960 that examines the rebuilding and restructuring of the Japanese art world in the context of defeat and occupation following World War II. For this project Professor Volk was awarded a Japan Research Award in 2006 by the Center for Historical Studies at the University of Maryland; during the 2009-2010 academic year she worked on it as a Fulbright Research Scholar at Waseda University in Tokyo.

Professor Volk received her PhD in Japanese art history from Yale University in 2005 and joined the University of Maryland faculty in 2006. From 2009-2012 she served as an officer of the Japan Art History Forum. Her work has been supported by fellowships and grants from such organizations as the J. Paul Getty Foundation, the Sainsbury Institute for the Study of Japanese Arts and Cultures and the School of Oriental and African Studies of the University of London, the Metropolitan Center for Far Eastern Art Studies, the Blakemore Foundation, the Japan Foundation, the Northeast Asia Council of the Association for Asian Studies, and the Council for International Exchange of Scholars.

At the undergraduate level Professor Volk teaches introductory and upper-level courses in Japanese art from the earliest times to the present. Her graduate seminars often focus on topics in early modern and modern Japanese art. All classes take advantage of major collections and exhibitions at nearby museums in the Washington, DC and Baltimore area. Some offerings include:

Revivals: Continuity and Change in the Japanese Visual Arts
The Visual Cultures of Edo Japan (17th-19th centuries)
From Edo to Meiji: Rethinking the 19th Century in Japanese Visual Culture
Japan and the West in Japanese Art
Japanese Art after 1500
Japanese Prints
Discovering Japan: How the Arts Shaped a Nation
Arts of Japan
Modern Art in Japan
Japanese Art since 1945
Japanese Art in the Twentieth Century: Colonialism, War and Occupation
The Social Role of Art in Japan after World War II
Japonisme
Artistic Relations between Japan and the United States
Cherry Blossoms and Samurai: Japanese Art in America
Arts of Asia: Cross-Cultural Connections

Note to prospective students: Graduate applicants must have a strong command of the Japanese language in order to be admitted to the program in Japanese art history, and are encouraged to demonstrate their preparedness for graduate study by passing the Japanese Language Proficiency Examination offered by the Japan Foundation in advance of their application.