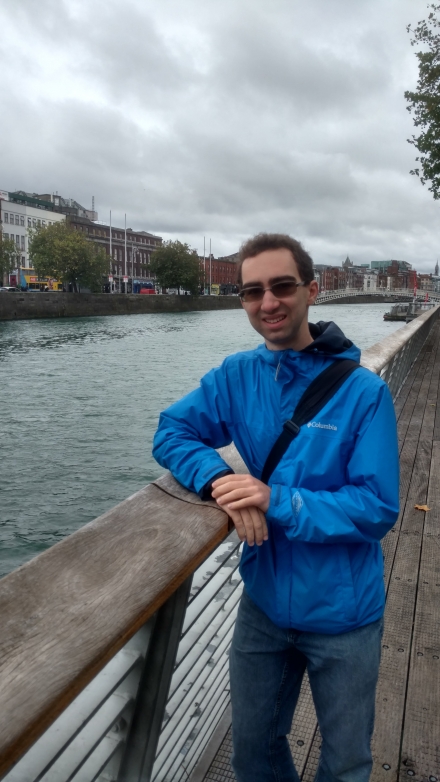 My study abroad experience in Ireland had a strong impact on my worldview and personality. When I first arrived in Ireland, I could only expect what I had read and seen through videos online of the university and the country. I was surprised to find that I adjusted quickly, within the first week, to the local customs and way of life. Reflecting back, I believe this was largely because English was also the primary language there, and this was especially evident when I traveled to other countries in Europe where this wasn't the case. Additionally, University College Dublin was set up similarly to UMD when comparing the size of the campus, the student body and variety of courses they offered.

While studying abroad in Ireland I learned to a much greater extent what being "independent" really meant. As with most study abroad experiences, being able to stay in contact with family and friends back in the U.S. is an important but difficult task because of the time change. If I had any questions or issues I needed to resolve in the morning, there was no alternative besides asking friends or advisors in Ireland. This led to increasing reliance on myself to solve any problems I had; for example, navigating Dublin's public transport network, buying food and medicine I needed and most other day to day decisions. Even though I'm an out-of-state student at UMD, while studying abroad I definitely learned more about independent living versus in Maryland.

The most important skill I acquired while studying abroad was gaining the ability to interact with different lifestyles and cultures around the globe. At University College Dublin I was privileged to have a program set up by the university specifically for international students. This allowed me to meet and make long lasting connections with other study abroad students. Through Irish cultural events set up by the international program, I made a tight-knit group of friends from more than 10 countries and four continents. Interacting with them every day allowed me to gain knowledge about their upbringing and country's culture more than any website could. This is significant because now I can much more easily connect with other potential friends or professionals around the world wherever my future career takes me.

Advice for future #TerpsAbroad: As a geography major, I would highly recommend anyone in the major or in corresponding environmental science majors to look into studying abroad for the purpose of building a foundation of the world. No matter where you study abroad, almost every university has courses on geography or the environment, specifically a class on their region as well. This allows another perspective on the subject you study. ​

The experience of making global friends and traveling with them all across the British Isles was truly an amazing time and my favorite part of studying abroad. Our first trip we took together was a guided bus weekend tour of County Galway where we got to view the remarkable Cliffs of Moher, get familiar with Irish nightlife and make homemade meals at our hostel. (That last part was especially great because we had a student chef in our company). From there we continued to explore our home university city of Dublin seeing the museums and natural areas always together.

As the semester continuedm we bonded over a card game I introduced called Nertz (basically group solitaire); picking up other international students along the way with it. I had an exceptionally fun time planning trips for us that included hiking along the coast of Edinburgh, Scotland, having 14 of us stay in one Airbnb next to Buckingham Palace in London and walking through huge Welsh parks in Cardiff.

Advice for future #TerpsAbroad: One of the biggest myths I've heard about study abroad is that it's too expensive. From my personal experience and from most others who I've talked to who've gone abroad, this almost is never true! I pay out-of-state tuition to go to Maryland, and studying abroad in Ireland was less than half the cost of total expenditures versus UMD. Even if I were in-state, it would have been roughly the same cost versus a semester at Maryland. Also, there are plenty of scholarships that you can apply for, and many scholarships you already have for UMD transfer to study abroad costs! ​

The other common myth I want to dispel is that it's hard to fit a study abroad semester into your schedule. Because UMD is partnered with so many programs, it’s very likely one or more of them will have classes you can count toward your major or general education credits. The study abroad office was very helpful in my understanding of a cost of a program and if my schedule would fit with it. Just remember to get started about a semester and half in advance to have the least amount of stress.

The hardest part about studying abroad for me wasn't even during the semester in Ireland, it was the reverse-culture shock when arriving back in the U.S. When arriving in Ireland, as mentioned previously, I found my transition to be quick especially because of other international students in the same situation as me. I didn't expect transitioning back to the U.S. to be difficult; I had only been in Ireland for four months. What was hard for me was re-connecting with my network in the U.S. While in Ireland it wasn't possible to keep in constant contact with family or friends so I didn't, and I really didn't need to either.

Advice for future #TerpsAbroad: Once I arrived back in the U.S. it took a few weeks to get back into the same day-to-day habits. I also didn't think much about starting a new semester at UMD until it was only a week or two before classes started. To rectify this, my advice would be to start thinking about transitioning back to the U.S. about a month before leaving to lessen the culture shock.

Study Abroad 101
What is study abroad? How does it work at UMD?
END_OF_DOCUMENT_TOKEN_TO_BE_REPLACED