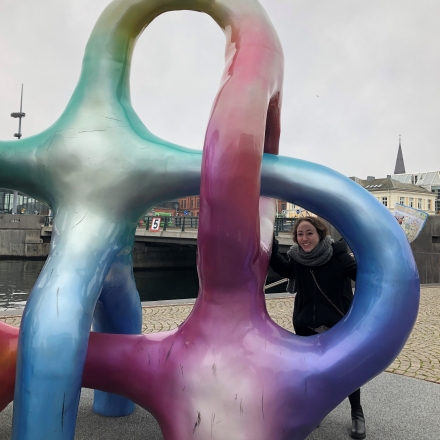 The experience of studying abroad has helped me to become more independent and self-reliant. While adjusting to living in a foreign place, I learned a lot about how to sense my specific needs and make subtle lifestyle changes for self-care, like buying succulents to compensate for a lack of city greenery. Accruing experience arranging my own flights and staying in accommodations with unfamiliar roommates has now also transferred to more practical skills, such as attending long-distance research conferences and expanding the geographic boundaries of my potential graduate studies. Of course, Danish culture itself has also affected my outlook on the world, and I am now more interested in cooking from scratch, using public transportation, and infusing "hygge" into my home and lifestyle!

Advice for future #TerpsAbroad: As an out-of-state student at UMD, I did not anticipate experiencing any feelings of homesickness when studying abroad, and was therefore caught off-guard by my initial difficulties in adjustment. I advise other out-of-state students to be mindful that the transition to living in any new place is unique, to stay in-tune with their feelings, and to feel free to reach out to others if they need help settling in.

One of my most memorable experiences of the semester happened right at the beginning. In the first few weeks of classes, I was determined to make some local friends... even though I had no idea how to speak Danish or where other college students hung out. I went to a local board game cafe, and just as I sat down at a table, a couple of girls in their twenties came over and asked (in English) if I was playing games with anyone or if they could join me. It turns out that the two girls were roommates at University in the Netherlands, who were visiting a Danish friend that one had met while solo backpacking in Budapest. Since the Hollanders didn't speak Danish, and the Danish girl didn't speak Dutch, they were all already using English as a go-between. They told me that they admired my courage in coming to a social environment alone to make friends, since solo travel was how they had all met each other in the first place. We ended up playing board games together, going out to dinner at a vegetarian buffet (they were all vegetarians like me!), and then heading to a bar to watch the handball tournament (a major sport in Denmark). We all added each other on social media and stayed in touch!

Advice for future #TerpsAbroad: One myth I heard about studying abroad was that it would be very difficult to maintain dietary restrictions, such as being a vegetarian. I was so concerned about being placed in a housing situation where I would be able to buy my own groceries without having to offend a host who cooked a meal [that contained meat]. However, I personally found Europe to extremely accommodating of individual dietary needs, and this was essentially never a problem for me. I would have been regretful if I had chosen not to go abroad because of my dietary choices.

One of the hardest parts of studying abroad was striking a balance between living as a tourist versus a local. I had so many lists of things to do and foods to try during my four months, but I was also so worried about blending in with the local community. I bought a new black winter coat, concerned that my bright pink one stood out too much among the local minimalist fashion, and swore off peanut butter, which, unfortunately, they don't really eat in Scandinavia. Retrospectively, these decisions may have been unnecessary, fueled by an insecurity of sticking out, even though nobody overseas actually expected me to dress and eat exactly as they did. More warranted were the efforts I invested in exploring rather than conforming. I made sure to spend as much time as I could in Copenhagen (instead of traveling elsewhere every weekend), and ask questions about history and politics to my visiting host family. I also gave a presentation to my visiting host sister's elementary school class about America, an opportunity that allowed me to serve as a cultural ambassador. At the end of my adventures, although I was not a local citizen, showing a demonstrated interest in my host country and its culture meant that I was also not an impertinent tourist.