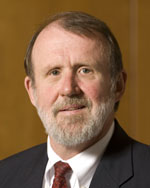 Kenneth S. Apfel joined the School's faculty in fall 2006 as Professor of the Practice. His teaching and research interests are in public management and leadership, as well as in social policy, with a particular focus on aging, health care, and retirement issues.

Before joining the School, Apfel served as the Sid Richardson Chair in Public Affairs at the University of Texas LBJ School of Public Affairs. Prior to that, he served as Commissioner of the Social Security Administration from 1997 until his term ended in January 2001. He was the first Senate-confirmed Commissioner of Social Security after SSA became an independent agency and the new Cabinet-level position was authorized by Congress. Previously, he had served as Associate Director for Human Resources at the Office of Management and Budget, and as Assistant Secretary for Management and Budget at the U.S. Department of Health and Human Services. Before he joined the Clinton Administration, Apfel worked for two decades in the area of social policy, as legislative director to Senator Bill Bradley, as the Senator's chief staff person for federal social and budget policy, as staff for the U.S. Senate Budget Committee, and as a Presidential Management Intern at the U.S. Department of Labor.

Apfel received his bachelor's degree from the University of Massachusetts, Amherst , in 1970; a master's degree in rehabilitation counseling from Northeastern University in 1973; and a master's degree in public affairs from the LBJ School of Public Affairs in 1978. He is an elected Fellow of the National Academy of Public Administration, the National Academy of Social Insurance, and the Council for Excellence in Government.