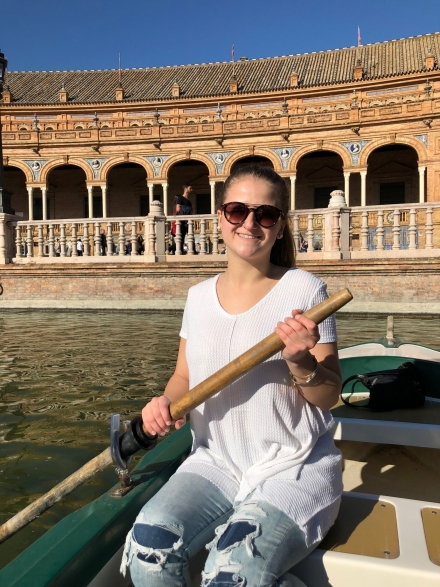 I think living on my own in another country allowed me to grow as a person. I got the opportunity to live with several roommates from all over the world, including the Middle East, United Kingdom, Spain, Mexico, and the US. I made friends who grew up in different locations with different values and families, which allowed me to expand my knowledge about the world outside of my previously limited perspective from only having lived in Maryland. I was forced to communicate with people in different languages at times, usually in Spanish, which helped me improve my Spanish speaking skills and communication skills in general. I was exposed to a different way of schooling, which forced me to make my own schedule to be accountable for when schoolwork was due and also allowed me to have more personal time to explore and travel. I was exposed to the innovation lab of the Spanish mail company, Correos, for which my Strategic Management professor was the CEO. I experienced some differences in the American and Spanish professional lifestyles, which I believe will help me interact and work efficiently with different people in my future career. I could also see myself working abroad after college. My personal traveling skills and knowledge definitely increased a lot over the semester. I was usually the one planning and organizing most of the trips my friends and I took on the weekends and during breaks, so I got familiar with how hostels and Airbnbs work, what transportation methods are like in each country, the cost of flights, etc. I felt like a pro after getting familiar with the different airports and traveling to/from different countries almost every weekend, sometimes alone and other times with friends. I also kept a detailed travel expense spreadsheet to make sure I stayed within my budget, so now I know how much traveling throughout Europe costs.

Advice for future #TerpsAbroad:  Study abroad is definitely an experience of a lifetime that I would recommend to anyone who is able to do it. It pushes you outside your comfort zone in many different ways, which will help you grow and mature. Everyone's study abroad experience is different, even if you go to the same location, so don't worry about what others are doing. Just enjoy your unique abroad experience and do what makes you happy. I would say that locations that aren't as "hyped up" as much as Barcelona and Rome, for example, are definitely still worth going to. I knew nothing about Madrid before coming here and it has exceeded my expectations and become one of my favorite places I've been to in Europe. I definitely want to come back to Madrid at some point in my life. I also wish I knew a more accurate estimate of traveling expenses before going abroad. My parents and I based my travel budget on the BMGT exchange program cost sheet, which I believe was probably based on previous students' estimates of what they spent on traveling, and I think it was a bit of an underestimate. I kept a detailed spreadsheet of my travel expenses (which I recommend doing), and it ended up being a bit more than what I expected. Now I did travel a decent amount (almost every weekend, with the exception of about 1 weekend a month), but I know other American abroad students travel basically every weekend they're here. I'd say my amount of traveling was average for an American  student abroad.

My most memorable experience while abroad was surprising my international friends in Newcastle, England during the first weekend I arrived in Madrid. I have a bunch of friends from the UK who work at the summer camp where I work in America, and they were all planning a reunion at one of my good friend's houses in Newcastle in the beginning of January. I told them I wouldn't be able to come because it would be my first weekend in Madrid and I needed to settle in. However, I really wanted to go and was coordinating getting to Newcastle with one of my friends who was going since November. I ended up booking a flight to Newcastle in December, and only my one friend knew about it. In the meantime, some of my friends in the UK had reached out to me saying they wanted to visit me in Madrid, so we started planning their trips. They all had no idea that I was coming and I was so excited! When it got closer to the reunion, I realized I had to tell my other friend that I was coming to her house because I needed to be picked up from the airport. When I told her, she cried and the rest of her family said they were so excited to finally meet me. I swore her to secrecy, and I'm honestly really surprised she kept it until the reunion.

I arrived in Madrid on a Sunday, and that Friday was my first international flight alone to Newcastle. I remember being a little nervous, but my excitement and anxiousness took over. I took the metro to the airport really early, went through security, and boarded my flight successfully on my own. There was a layover at the London Heathrow airport, and as soon as I stepped off the plane everyone was speaking English in English accents. This was a relief because I could finally easily understand everyone around me, and I love the English accent. Then I boarded my second flight and kept my friend updated about when it was landing. When I landed, I ran off the plane and saw my friend and her whole family waiting to pick me up. It was so good to see her and meet her family! They were so nice, and they took my bags to their family car and drove home to their new house. It was really cool driving home because they drive on the other side of the road. Everything about Europe was still so new and exciting at this point.

After I saw her house and dropped my bags off, her mom dropped us off downtown. The next day, she took me sightseeing before going to the train station to pick up some of the other girls who were coming. I brought my GoPro to get the whole surprise on camera, and it worked! My friend from London got off the train and ran up to me crying. The rest of them were so surprised too. They couldn't believe I had this whole plan for a while and I was actually there and none of them found out about it before. After the initial shock, we went [out] to meet the rest of the girls who came for the weekend. I jumped out from behind the door and surprised them too. Everyone was screaming and hugging, and it was just so great to see their faces because I hadn't since the summer.

That night, my friend and her family hosted a pre-party at their house and everyone came to get ready to go out together. We ate, caught up, and played with her dog. I felt like I was in a family environment again, which I had missed from living back home in Maryland even though it had only been a week. We all went out downtown in Newcastle, which is known for its nightlife, and it was so fun! That weekend was definitely one to remember.

The hardest part about studying abroad was planning housing. The BMGT Exchange program really doesn't provide students with any help when it comes to personal things like housing, as opposed to the Maryland-In program. After getting accepted to the Madrid exchange, I was basically on my own for everything. Luckily, I knew a few friends who are engineering majors at UMD who were planning on studying abroad in Madrid, and they had a service they paid for with their program which helped them look for apartments. I was able to take advantage of this service too because I agreed to live with them. It was difficult picking apartments with not too many roommates in a good location because we were all unfamiliar with Madrid. Our schools were also pretty far apart, so we were trying to get an apartment in the middle. However, due to the slow communication of this Spanish company, a lot of the apartments we wanted were taken before we could sign the lease. We ended up getting a place within walking distance from my school, which worked out really well for me. However, my roommates had an hour commute to their school. The apartment was in a nice location, but I think it would have been cool to live closer to the city center.

Study Abroad 101
What is study abroad? How does it work at UMD?
END_OF_DOCUMENT_TOKEN_TO_BE_REPLACED