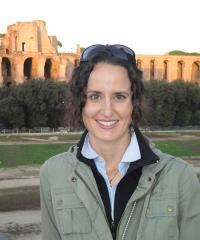 Maryl B. Gensheimer is a historian of Roman art and archaeology.  Her research focuses on the art and architecture of the city of Rome, on the Bay of Naples, and in Asia Minor.  She is particularly interested in ancient cities and urban life, and the social structures and interdependent systems of urban design and urban infrastructure that impacted the ancient experience of monuments and spaces.

She holds a B.A. in art history from Williams College (2005) and earned her M.A. and Ph.D. in Classical art and archaeology at the Institute of Fine Arts, New York University (2013).

Dr. Gensheimer’s research on Roman imperial baths, the subject of her dissertation and current book project, crosses disciplinary boundaries at the same time that it addresses a lacuna in the scholarly understanding of these sites.  Using the comparatively well-preserved Baths of Caracalla as her major case study, Dr. Gensheimer presents a systematic evaluation of the decoration of imperial bathing complexes in Rome and reconstructs, from the perspective of a Roman viewer, the original visual experience of these grandiose monuments.  For her interdisciplinary approach and original analysis of the connections between visual culture and political ideology, Dr. Gensheimer was awarded the Dean’s Outstanding Dissertation Prize (2013-2014) from the Graduate School of Arts and Science at New York University.

Dr. Gensheimer’s work also has been recognized by the Archaeological Institute of America (AIA), Center for Ancient Studies at NYU, Lemmermann Foundation, Mellon Foundation, Society of Architectural Historians (SAH), and US-Italy Fulbright Commission.  Most recently, Professor Gensheimer was a Fulbright fellow to Italy during the 2012-2013 academic year.

At the undergraduate level, Dr. Gensheimer teaches a range of introductory and more advanced courses on the various intersections between art and society in ancient and medieval Europe and the Mediterranean, with an emphasis on the art and architecture produced during the Roman Republic and Empire.  Her graduate seminars include “The Art and Archaeology of Roman Spectacle,” “The Roman Dinner Party,” and “Lost Cities on the Bay of Naples.”

Professor Gensheimer is a faculty affiliate of the Department of Classics.