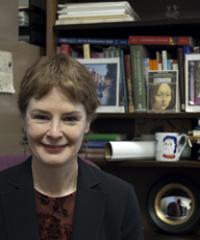 Meredith J. Gill is a historian of Italian art and architecture from the late medieval era through the sixteenth century. Her scholarly interests focus on the intersections of art and spirituality, with an emphasis on theology and philosophy.

She is the author of Augustine in the Italian Renaissance: Art and Philosophy from Petrarch to Michelangelo(Cambridge University Press), and she has contributed chapters to Rome: Artistic Centers of the Italian Renaissance(ed. Marcia Hall) (Cambridge University Press) and to The Renaissance World (ed. John Jeffries Martin) (Routledge). Among recent essays is her study of Guillaume d'Estouteville in The Possessions of a Cardinal: Politics, Piety, and Art, 1450-1700 (eds. Mary Hollingsworth and Carol M. Richardson) (Penn State University Press) and her chapter on the humanist, Lorenzo Valla and the idea of forgery in Rethinking the High Renaissance: The Culture of the Visual Arts in Early Sixteenth-Century Rome (ed. Jill Burke) (Ashgate).  She is a co-editor, with Karla Pollmann, of Augustine Beyond the Book (Brill), a collection of interdisciplinary studies on Augustine’s reception.  Her book, Angels and the Order of Heaven in Medieval and Renaissance Italy is forthcoming with Cambridge University Press.

In the Summer, 2010, she led two sessions for the National Endowment for the Humanities Summer Seminar, “Re-Mapping the Renaissance: Exchange between Early Modern Islam and Europe" (Center for Renaissance and Baroque Studies, University of Maryland).

In her teaching, Professor Gill also concentrates on interdisciplinary themes that address social history, the history of science, and gender in the visual arts. Her articles (appearing in Storia dell’Arte, Renaissance Quarterly, andZeitschrift für Kunstgeschichte) have focused on French and Spanish patronage in Quattrocento Rome, and on architecture, church decoration and funerary sculpture. She contributed articles to the Festschrifts of Richard Krautheimer and John Shearman, and was a co-editor of both volumes.