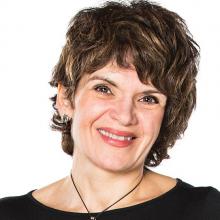 Michele Lamprakos holds a joint appointment in the Historic Preservation and Architecture Programs.  Trained as an architect and an historian, she is interested in the historical layers of buildings and cities.  Her geographical focus is the Middle East and the Mediterranean world.  Professor Lamprakos began her career as a development worker in Egypt, where she managed a project to revive the cottage silk industry in the Nile Delta. Through this work she developed a deep interest in material culture and the role it can play in transforming people's lives.  This led her to the study of architecture and later, urban history and conservation.

Professor Lamprakos’ career has combined teaching, research, and practice in architecture and preservation.  Publications include Building a World Heritage City (Ashgate, forthcoming 2015), a study of conservation and building practice in Sana’a, Yemen.  She has co-organized two international symposia:  “Heritage and the Arab Spring” (Freer Gallery of Art, February 2014); and "Conserving the City: Critical History and Urban Conservation” (University of Pennsylvania, April 2012).  The proceedings of the latter were published in a special issue of Change over Time (University of Pennsylvania Press, April 2014), with Professor Lamprakos as guest editor.   Her current research on the Great Mosque of Cordoba looks at the changing fabric and meaning of the building through the centuries: as Catholic cathedral, historic monument, and symbol of the Islamic past in Spain.

Professor Lamprakos has taught at the University of Pennsylvania, Duke University, the Maryland Institute College of Art, and Philadelphia University.  Courses have included studios and seminars in architectural design, urban history, adaptive reuse, and preservation.  Her professional work has included design and preservation for buildings that range in scale from federal properties and tobacco warehouses to prewar single-family homes.  She has worked closely with building trades on site, and has been involved in various aspects of construction management; this nurtured an interest in the various types of knowledge and practice that shape the built environment.  She is owner of PALIMPSEST LLC, a design and consulting firm that focuses on older buildings and sites.  Recent work includes Technical Review for the Aga Khan Award for Architecture (2010 and 2013 Award cycles).