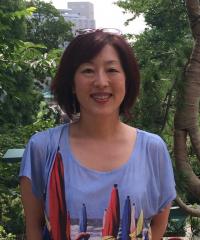 I joined the Department of Art History and Archaeology at the University of Maryland in 2006, after earning my Ph.D. from the University of California, Los Angeles in 2005. I am a historian of early medieval Japanese Art whose research examines issues of Japanese religiosity and its manifestations in visual/material culture. I am particularly interested in how humanity’s basic need to understand the unfathomable, intangible something, finds concrete expression through the material and visual realms of religion and art. My interest in Buddhist icons culminated in the book, Medicine Master Buddha: The Iconic Worship of Yakushi in Heian Japan (Leiden: Brill, 2012), which explores the primacy of icons in disseminating the devotional cult of the Medicine Buddha. The book analyzes surviving examples of Medicine Buddha statues from the Heian period (794-1185 CE), which I argue were symbolically and ritually linked to Saichō (766-822 CE), the founder of the Japanese Tendai Buddhist school.

My research interests have extended to thinking about art and religion beyond the study of material and visual culture and also across time periods. From 2009-2011, I participated in a research project sponsored by the Initiative for the Study of Material and Visual Cultures of Religion at Yale University. The three-year collaborative project brought together scholars from various disciplines to explore the subject of religion and the politics of vision in multiple religious traditions and times. Specifically, my work explores Japanese sacred art objects within the larger context of “sensory cultures,” where visual appearances are considered only one aspect of a ritual object’s sensory dimensions. This intellectual venture examines artifacts as embodying cultural ideals through their multi-sensory attributes (that which can be tasted, touched, imagined, seen, smelled, or heard). Such an approach deepens the concerns of art historians to understand objects in new ways, by exploring the multiple sensorial qualities of religious artifacts and the people’s experience of them in this broader context.

My current research reconsiders the roles of ritual objects and human bodies as mediators between the material and spiritual worlds. Specifically, I am examining the Japanese ritual practice of placenta burials and its material culture, to demonstrate that the Japanese considered human placentas as a separate entity charged with great spiritual potency, rather than as an extension of the human body. My work reveals the changing notions about the human body, and by extension, sex and gender in ancient and medieval Japan. Furthermore, my research attempts to shed light on the complex relationship between invisible, dis-embodied entities and human bodies through the use of magical objects.

I am also a member of The Association for Contemplative Mind in Higher Education (ACMHE), a multidisciplinary academic association with an international membership of over 650 educators, administrators, staff, students, researchers and other professionals committed to the transformation of higher education through the recovery and development of mindfulness and equanimity in teaching, learning and knowing.