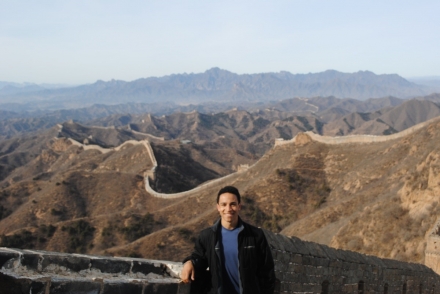 The best thing that studying abroad has done for me is to put things into perspective. As I traveled the world, I began to realize how overwhelmingly little I actually knew about the rest of the world and all of this incoming information was helping to provide me with added perspective and has thusly made me more well-rounded.

Advice for future #TerpsAbroad: I suppose the easiest way to define me based on the terms that were provided above, would be to label me as a mixed-race male of Caucasian and African-American descent. To a prospective student who is like me, I would say that most likely you will be the only American black guy on the ship, but this should not discourage you from capitalizing on a once in a lifetime opportunity and hopefully opening the gate for more people of our race to join.

The Story of the Symphony: At around 5pm, Ramin and I remembered that there was an art exhibit at the Tokyo Metropolitan Art Museum and we thought this would be a great way to conclude the day. At 6pm we arrived at Ueno Station and we immediately learned that the museum had just closed half an hour earlier. Feeling very discouraged, we walked across the street to take pictures of some statues. From there, we peered inside the adjacent building at a very long line that bent around the corner inside. Our curiosity quickly got the better of us and after questioning the woman at the front desk we learned that there was going to be a symphony starting shortly. We continued to question the woman at the front desk and we learned that the doors to the show would open at 6:15pm, with the actual show starting at 6:45pm, and that with the student discount the price for each of us would be ¥2000, or about $18. At this point we decided that this opportunity was too great to pass up so we hurried to the desk at the front of the line to purchase our tickets. The first of many setbacks occurred when we learned that they would only accept Yen, no credit cards, and that each of us only had ¥1000. Not to be discouraged, we hurried back to the gift shop near the front desk and attempted to get cash back on our credit cards, which unsurprisingly they would not provide. Next, we got the attention of one of the managers of the hall who directed us back across the street to the only nearby ATM which was located outside the train station. Unfortunately, the machine was only in Japanese and after some confusing help from a Japanese woman who didn’t speak English, we found out that the ATM would only accept Japanese credit cards. The time was now approximately 6:25 and we were beginning to lose hope, so we raced back to the symphony hall and asked the woman at the front desk once again where we might find an ATM. She graciously suggested that there may be some down the street in the nearby city. We ran down the street just faintly hoping that we might come across an ATM in a FamilyMart. Finally by our 3rd ATM in the city, we found one that would accept U.S. cards and promptly removed the necessary funds and sprinted back up the inclined street to the symphony hall. We re-entered the hall with only seconds to spare, short of breath and completely devoid of energy and the ever-helpful woman at the front desk leapt with glee as she pointed us towards the counter where we could by the tickets. At 6:44pm, we bought our tickets and entered the auditorium. We were treated to a spectacular grouping of Mozart’s classics as performed by Ryo Terakado, the violinist, and Akira Harada, an exceptionally dressed and even more exceptionally accomplished viola player, along with the outstanding Tokyo Symphony Orchestra. After the show, we lingered, as we had so frequently done up to this point, and ended up meeting the two star performers, getting pictures with them, and receiving their autographs on our ticket stubs. This would end up being my most unforgettable experience in Japan and it will forever represent to me that the best adventures are also the most spontaneous, in which one both enters and leaves with zero expectations.

Advice for future #TerpsAbroad: I would say to attend the UMD career fair and once you have decided on a study abroad program to start making moves as early as a year in advance. Also, frequent the education abroad office because my biggest regret from planning is that I didn't go sooner and more often. The peer mentors are VERY helpful.