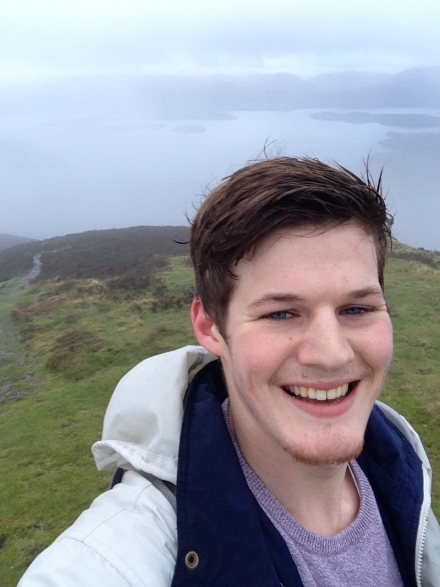 My most valued academic opportunity thus far is my international study in Scotland. It has been an amazing experience; meeting local Scots, adjusting and becoming immersed in the Scottish culture, learning at the University of Glasgow, and hiking in the highlands of Scotland. I was able to make strong and hopefully lasting friendships with students from the University of Maryland, as well as students from across the United States and Europe.

I consciously felt my own cultural awareness growing as I studied in Scotland and travelled in Europe. Simply being physically involved in these different cultures has opened my mind to the many different cultures that are in the world that I have yet to experience. This has allowed me to see world events on a global scale more personally and realize that what the USA does has far more impact than is apparent because of our government's global influence and economy. The study abroad has essentially given me a far better idea of what Europe has to offer and has given me a glimpse of my potential future.

Advice for future #TerpsAbroad: My major is Chemical Engineering and it is relatively difficult to study abroad due to the stricter engineering schedule which causes students to disregard Study Abroad as an option. I would tell a student who is planning to go abroad or even slightly interested that I travelled to the city of Glasgow, primarily to study but I gained far more than academic knowledge and experience. I was immersed in new cultures as I lived in Scotland and travelled to ten different countries in Europe. Committing to having an adventure similar to the one I had can be intimidating but the opportunity that Education Abroad at UMD and the Gilman Scholarship offered has caused me to be noticeably more fearless, determined, open minded and comfortable with being uncomfortable with new or potentially difficult situations. Without the semester abroad I am certain that I would not have the same confidence and dedication to my academic career and in life. If you are interested, I implore you to investigate these opportunities as soon as possible.

Kindness makes everything nicer- the people of Scotland, in an everyday interaction such as the one between a grocery store cashier and a customer, seem to be delighted by life itself and that attitude consistently put me in a great mood. I remember this well because I do not find the same attitude nearly as often in the United States but this contrast compels me to be bright and friendly to people. I loved the genuine nature of the local Scots, offering to help someone in need or a simple favor while seeking nothing in return. I was shown this many times by people, young and old, that I met on the street and eventually befriended.

Advice for future #TerpsAbroad: Studying abroad is a terrific way to meet new people from different parts of the world while studying in a land and becoming involved in a culture that was previously foreign. I wish that I had known how friendly Scottish people were to begin with because if I had, I believe I would have actively pursued friendships with Scots with less fear of failure. Despite this, the Scots taught me to be a more inviting person and to seek people out because there really is nothing to lose from trying to be kind or friendly but everything to lose by not talking to someone, for it is only a missed opportunity to be afraid of such things.