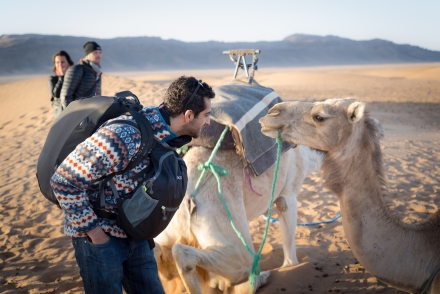 Study abroad widened my horizons and gave me a new and worldly perspective and attitude. The most influential experiences that had while studying abroad were talking to people from all around the world when I would embark on weekend adventures and stay in hostels. I made it a point to book rooms that were not small rooms because I wanted to meet people and socialize and gain an understanding of their culture and lifestyle, and I can say that it was most definitely my best decision to do so. I have friends all around the world now and we are connected through social media. Following their lives today is so interesting and I hope they can say the same about me!

Advice for future #TerpsAbroad: Study abroad [courses are not] easy. Obviously this will vary from program to program, but I studied engineering in Spain and the courses were not easy! In fact, I found the curriculum to be harder abroad than it is at UMD. I enjoyed the change, and it was very interesting to see how school was different in Spain, but other students need to be aware that their classes will not be a cakewalk, and there are things that will be different that will most likely make your academic experience harder.

Reflections on Racism While Studying Abroad: In Europe, I felt that there was a much larger sentiment against Brown people, most likely due to the refugee crisis that has directly affected Europe. This being said, I felt as though it was a necessary experience, and did not take away from my study abroad in a way that was negative, but rather that the experience was a positive one that allowed me to feel a different form of exclusion that I usually would not feel. I was never put in danger or threatened by others, but I could feel how attitudes and sentiments toward people like me were different as to how they are here in Maryland. To other students like me who plan to study abroad, I would definitely encourage the experience, despite what I described above. I had an amazing time, and would do it again in a heartbeat. ​

Taking weekend trips around Europe was my favorite part of study abroad. The most interesting trip that I went on was most probably my trip to Turkey. I started my journey in Madrid in the morning, reached Istanbul, and then took another connecting flight to a city called Kayseri, in the Cappadocia region in Central Turkey. I reached Kayseri at midnight, an entire day's worth of travel! The next morning, I woke up to catch the sunrise from a hot air balloon at 4 AM, only getting 3.5 hours of sleep. Time was not to be wasted, as I only had one day in Kayseri, so after the sunrise hot air balloon ride, I took a tour of the Cappadocian region around Kayseri, and then retired at 10 PM. Unfortunately, I had another flight to catch to Istanbul at 6 AM the next day, so I only got 4 hours of sleep again. I reached Istanbul and spent the entire day seeing the beautiful city. The Islamic culture and architecture was amazing. The huge mosques in the city were the most beautiful buildings I have ever seen in my life. Not only that, but Istanbul had a vibrant nightlife as well. Having visited Morocco and a few other Muslim countries before, I felt that Turkey was the closest to the West in terms of culture, and experiencing that was truly a great experience.

Other memorable experiences: snowboarding in the French Alps in Chamonix, navigating the Fjords, hiking Pulpit Rock, and ​camping in the Sahara Desert