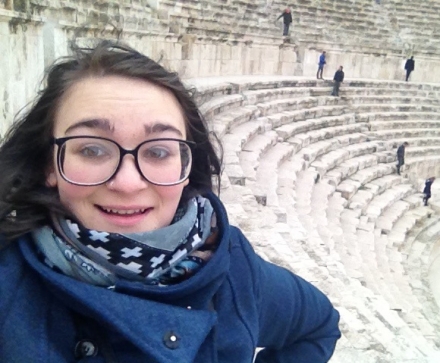 Studying abroad improved my language skills dramatically and opened doors for me to continue working in-country through the summer. I was able to network to find an internship which led to a job which I plan to return to after graduating. More than anything, making friends in professional expat/ngo networks opened my eyes to how (somewhat alarmingly) easy it can be to find work in Jordan as an English-speaking foreigner, and shaped my opinions on working in the foreign aid and nonprofit sector in general.

Advice for future #TerpsAbroad: Speaking as a cis-woman, harassment is very real and high in occurrence [in Jordan]. However, I feel that it's a distinctively different kind of street harassment, and I generally felt like it was less sexual in connotation than in the U.S. I feel that when I get yelled at in DC, it's fairly aggressive and contains some kind of sexual connotation. In Jordan, while I would get more comments in general, most of the time they boiled down to "Hey, foreigner!" and came from younger boys trying to provoke a reaction, but not necessarily in an aggressive way. My main advice would be to remember that generally Amman is much safer than College Park or DC in terms of crime rate, and to try not to be closed off to new experiences or visiting new places simply because you might be yelled at by a group of  teenagers while you're walking around on the street.

Amman is a huge city and the neighborhoods have such distinct identities that feel much more like a community than I've experienced in the US. During the summer, I lived in Luweibdeh, the "artsy" neighborhood in Amman, and I loved walking around and seeing people I knew outside in the evenings, knowing the shop keepers along my street, and drinking coffee after sundown outside with friends.