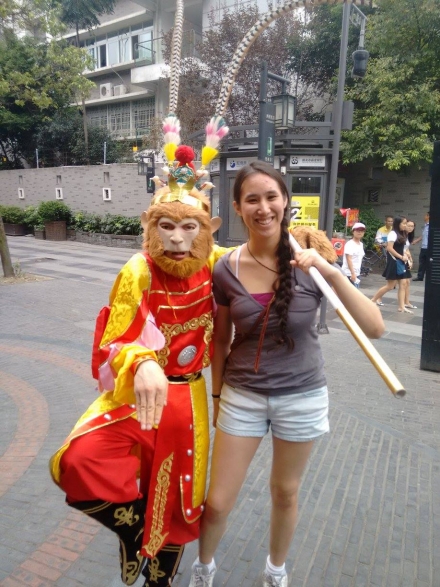 I got a lot of useful information on job opportunities to teach English in China full time. I tutored a 10 year old Chinese girl in English. Her family was super nice to me and I had dinner with them often. It was fun when she got over her nervousness and just talked to me in English. Being half Chinese, it was personally very fulfilling to live and feel at home [in China], and my Mandarin [language skills improved because] USAC requires you to take 9 credits of language while you're there​. I met a lot of great people, both fellow American students and locals. A few of my classmates are thinking of moving back to Chengdu semi-permanently. It's a fast-growing city, increasingly friendly to foreigners, and overall a fantastic place for entrepreneurs.

Advice for future #TerpsAbroad: If you are of Asian background, be warned that your experience in China is going to be different than that of White people. China is obsessed with Americanizing/globalizing itself, so locals [go out of their way] to be nice to white people. White people are minor celebrities in certain parts of China, and I'm not exaggerating. Black people, be warned that you're going to be a major celebrity. People will stare and touch your hair.

Most local Chinese are unfamiliar with the concept of Asian Americans--if you look Asian, they'll assume you're local and speak Chinese fluently. This means that if you're the only Asian American in a group of white people, waiters will automatically look to you to translate and act as the go-between. It didn't ruin my experience or that of my Asian-American friends, but it did get irritating sometimes. That being said, GO TO CHINA. My semester was GREAT. Chengdu has awesome food, a fun and relaxed culture, lots of historical and cultural sites. USAC in particular attracts really awesome students so it was easy to make friends with fellow students. Just keep in mind that if you're not white, you may be faced with irritating situations.

The food is great. Sichuan cuisine is really spicy, but Chengdu also has a lot of Muslim and Tibetan restaurants. We went out to eat hot pot, which is spicy boiling oil into which you drop meat and vegetables. Sometimes I have Chengdu Food Flashbacks and cry because I miss it.​

Advice for future #TerpsAbroad: [Cultural] Immersion is not automatic. It only happens if you make it happen. Don't take the easy route and spend all of your time with fellow Americans and go to restaurants that serve American food. You have to make some effort to actually immerse yourself and connect with locals. This means leaving your comfort zone. That being said, there is no one right way to do your study abroad. Most of my classmates traveled to other parts of China. I stayed put in Chengdu and it was great because it was a chance to learn the city better. The local dialect in Chengdu is NOT Mandarin, it's Sichuanhua. It's really cool to hear random languages like Sichuanhua and Tibetan, but that does make it a little harder to practice Mandarin. There's a huge Tibetan community in Chengdu as well as other non-Han minorities, so I learned a lot about a different side of China. Also, stuff in China is CHEAP. So PACK LIGHTLY. You'll thank yourself when you have room for souvenirs and whatnot.