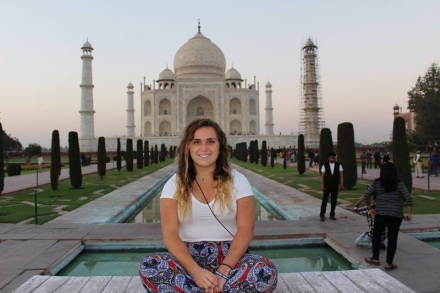 Studying abroad has opened my eyes to a whole new viewpoint. I had left the country before, but nothing like this. Getting to experience 11 different countries and cultures in just 3 and a half months was amazing. I think I learned a lot about having a global mindset and how to be open to new experiences. The best thing about Semester at Sea was that there were only 4 UMD students and the other 596 were from universities around the world. I have made connections all over and feel comfortable in my ability to leave my comfort zone.

Advice for future #TerpsAbroad: As a woman visiting Southeast Asia, it could be hard at times. My advice would be to be prepared to see things you don't like. In many cultures, women still do not have the rights that we have here. As an American woman, I felt appreciative of what my life is like at home. Also, bring short sleeve plain t-shirts because it gets so warm and you have to have your shoulders covered, and you will probably buy a lot of long elephant pants!  ​

The best trip of my life was in the most unexpected of places. In February, I had the pleasure of spending five days in Myanmar. Not knowing much about the country, I had no idea what to expect. My friends and I decided to go on a pilgrimage to a Buddhist golden rock pagoda in the mountains. I had never felt so immersed in a culture ever before. We were surrounded by thousands of people and got to respectfully take part in a ritual and prayer. It was the most amazing experience of my life.

The hardest part was being away from my friends, especially because they were all in Europe. I knew that I was going to miss my family, and of course my dog, but I did not anticipate feeling so disconnected from the girls that were studying on the same continent and got to visit each other. Instead of focusing on this, I realized how much good I had in my life on the ship. I got to be exposed to so many people and make new friends, not to replace my other ones, but to expand on them. Yes, I was bummed when everyone met in Barcelona for the weekend, but I was in India at the Taj Mahal, so really, who won?

Advice for future #TerpsAbroad: Make it work with your schedule, no matter what your major is. I know so many people who thought that they couldn't study abroad because of their major, but I truly believe that there is a program for everyone, even if not a full semester time.