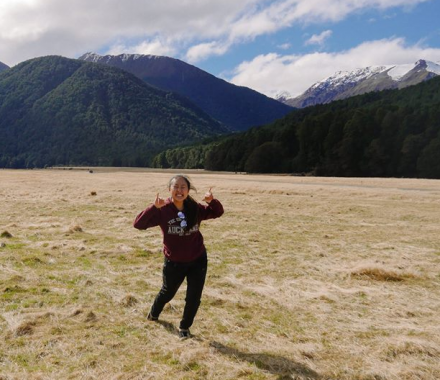 Being truly alone in a new country is the best test of independence and self-sufficiency, and it helped me become a much more independent person. From traveling alone to going to buy groceries alone, it was refreshing to be able to do things without feeling like I needed someone to come with me.

Advice for future #TerpsAbroad: I've often heard of the "five stages of grief while going abroad." I would say that these feelings, while definitely being present, aren't nearly as intense or overwhelming as you might think. The experiences you have right in front of you in your study abroad country will definitely keep you busy and very, very happy.

For my two week long mid-semester break, I went on a twelve-day road trip up the entire west coast of New Zealand's South Island with four other exchange students. The sights and beauty of the landscape were amazing. In Queenstown, on my 21st birthday, I jumped 440 ft at the biggest bungee jump in New Zealand. In Coromandel, I soaked in hot springs at midnight on a beach. In Hahei, I held baby pigs on a farm. All of these little moments while traveling will stay with me long after my semester abroad comes to an end!

Advice for future #TerpsAbroad: The hardest part about studying abroad was adjusting to interacting with other students from all over the world. Mainly, it's a little jarring to talk about issues like race or gender equality with people from other countries that don't really grasp the societal issues in the U.S. I think the best thing to do is to be resilient in your beliefs and engage in constructive discussions with people from other countries with different viewpoints; we're abroad to learn more, after all.