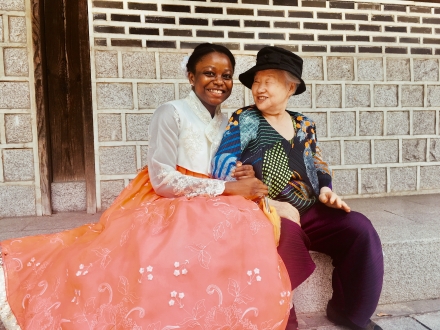 I went to Korea without taking any prior Korean language class, and I came back with an intermediate proficiency level. I currently work with the Center for Advanced Studies of Languages because of my experience in Korea. I would never have had the confidence to apply for a job that involved Korean speaking, reading, or writing but because of that one experience I have a well- paid job that I like. I built a new network with Koreans, and even international friends that I met abroad who have similar interests as I do.

Advice for future #TerpsAbroad: I expected that people were going to stare at me as a woman of color with my hair in curls and people did (mostly the older generations), but when it happened I couldn’t help the emotions I felt so I talked about it and came to understand their stares as curiosity. And that was fine. Staring is rude and it will happen, but just imagine you’re a celebrity and then walk like a boss and smile as they take pictures (they will). ​

During the second week of my stay [in Korea], I wanted to return home because I didn’t have friends and I wasn’t familiar with the environment. I decided to persevere and put myself out there, so I got myself a language exchange partner. My first semester was awesome and I took classes in English and I was glad I stayed. During my second semester, I became really fluent in the language and I took my classes in Korean and felt more comfortable. Most Koreans will open up to you when they see you’re making an effort to speak their language. Then they try to communicate and be friends too.

Advice for future #TerpsAbroad: I always wanted to study abroad and did my research for a year and some months before actually going. It’s not true that no one speaks English in Korea because they do. It’s not true that they don’t like you because you’re a person of color because they do (maybe too much). I pretty much knew what I needed to know but still had my share of culture shock. Do your research. It will help but don’t depend 100 percent on it.