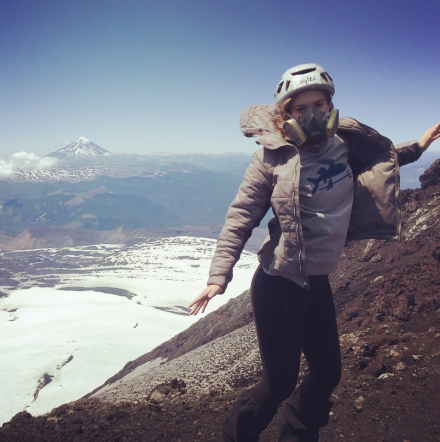 Studying abroad helped me gain a lot of new life-long friends from a number of different majors. It also showed me that I could definitely go to Graduate School or work abroad and that it wouldn't be as scary as I thought it would. Most importantly, I learned the history of a beautiful country that has gone through a lot of suffering and overcome it. In turn, I learned a lot about our own country and what we can do to avoid similar suffering ourselves in the future. Personally, I learned many new things about myself and gained a lot of confidence after climbing an active volcano during my free time in Chile.

My study abroad experience was really cool in that we had people from many different backgrounds and majors. I think the thing that made us so close is that we were really interested in learning about and celebrating the things that made us different and the same. It was also fun for me because our group consisted of mostly women so I gained a lot of new friends and had a lot of great talks about what it's like to be a woman in this world.

Advice for future #TerpsAbroad: I would advise someone who has never studied abroad to leave all of your worries behind and just do it. Despite your major, there is most definitely a course that will interest you and studying abroad is an experience unlike any other. The people on your trip will become your family and the time will fly due to the amount of fun things you end up doing. I think it's very important to note that you don't just spend all your time doing classwork. The unique thing about study abroad is that it gives you the opportunity to learn in many different environments and you have free time to explore things that interest you.

My favorite experience while studying abroad was teaching summer camp for a week in the city of Valparaiso. The particular study abroad program that I did does this every year and I think every year it gets better and better. Each student on the [program] is assigned to a younger child to hang out with for the week and we do things like play soccer, do art projects, and go to the pool. After bonding instantly, I was assigned to a six year old Venezuelan refugee named Ivan who had just started at the school with his older brother. We had an amazing week but the highlight for me was meeting his mom on our last day at the school. When we met she immediately started getting teary eyed and couldn't stop saying thank you. She then asked if we could take a picture on her phone and told me how much it meant to her that someone was making her little boys laugh again.

The most difficult thing for me personally [about studying abroad] was probably the lack of time management...This caused a lot of waiting around, which I had to get used to considering I'm so used to America's strict views on time-keeping. However, in the end I learned to relax and live in the moment rather than stress over the schedule not being set in stone. This also resulted in a lot of beautiful spontaneous moments that we most likely miss here in America in order to try and stay on schedule.