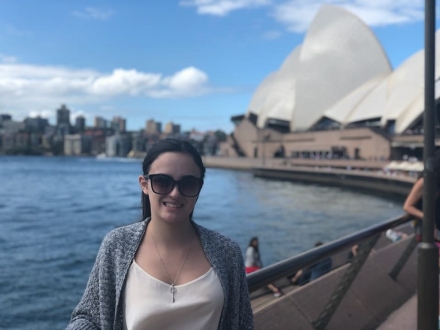 During my time in Sydney, I was able to experience new challenges and meet people from all different areas of the world. I met students from Norway, Belgium, New Zealand and Australia. My time at Sydney also introduced me to fellow international students from across the United States. I now have an international network of friends and connections to professors in Australia.

My time abroad helped me to grow as a person. I am typically shy, but I was studying abroad alone, and had to deal with all the challenges of settling abroad. The programming setup before the beginning of classes forced me to meet others and to trust myself. This made me more confident and allowed me to experience things I never would have otherwise. For example, I completed a surf camp, I tried skydiving, scuba diving at the Great Barrier Reef, and also explored both Thailand and New Zealand.

Advice for future #TerpsAbroad: I would recommend that everyone who gets the chance to study abroad to take advantage of it! As a kinesiology major, The University of Sydney is ranked #1 in the world for sports-related subjects which was very beneficial for me. Also, I come from a single parent household with three kids in college. If money is a concern, look into different types of programs because I was able to save money on tuition through direct enrollment as an out-of-state student!

I did so many amazing things abroad, but the thing that was probably most memorable was just living in Sydney, Australia. My roommates and I had a favorite place to go on Tuesday for $2 tacos and we would pass the Sydney Harbour Bridge and the Sydney Opera House each week on our way there. Multiple times throughout the semester, it would just hit me that I was really in Australia when I would see the Opera House light up at night. One night around midnight, two friends and I went and laid on the steps of the Opera House and just looked at the stars. It was truly amazing.

We also had favorite cafes and a weekly market down the street from our apartment that we went to pretty regularly. There was a second hand bookstore that I fell in love with and frequently visited. Feeling like a local in Sydney really helped me to fall in love with the city and to feel at home

Advice for future #TerpsAbroad: Meet with an advisor to work your schedule around the possibility of going abroad. I thought it wasn't possible for my first two years because of money and switching my major. I worked with an advisor to see what classes I could take abroad and planned around those/that semester.

I was nervous about being homesick or missing out on things happening at UMD, but with technology you can message/Facetime/call friends and family everyday! Also, the things you miss at UMD will happen the next semester, but studying abroad may be a once in a lifetime opportunity. Don't worry about missing out at home and end up missing out on this experience.

The hardest part was making good friends quickly. I wanted to make the most of my time abroad, but you only have so much time to get to know everyone and I'm shy. I just jumped right in and introduced myself to a bunch of people. It is likely that they are in the same boat as you and don't really know anyone. We spent time getting lunch or just hanging out the first few weeks and now it is like I've known them for years! It wasn't always easy especially because most of my roommates arrived before me and had already bonded. I sometimes felt out of place in the beginning, but once I got to know each of them it went away! It's like when you first get to college and don't know anyone.