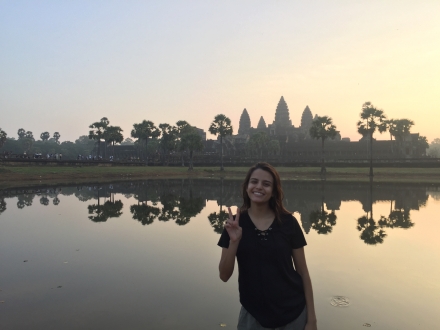 I got to step out of my comfort zone and began to learn two languages. Using those languages, I was able to meet people and learn how they see the world and what they know and perceive about their country and mine. I learned that I love being productive in cafes and ordering delicious food and drinks. I experienced hostels and how to pack for trips outside of the U.S. (we have lenient baggage weights in comparison). I took myself to the hospital in a foreign country and ensured I was healthy all by myself for the first time. I spent a lot more time on my own than I do back home and thoroughly enjoyed my time in SE Asia. My teachers treated me like old friends, my host family treated me like family, and I made friends that I still connect with and would love to see in the future. Connecting with so many locals and foreigners will help me relate and network in my professional career; or at the least, give me some great stories to tell in conversation! I also learned a lot more about how the US's foreign policies have directly affected people in Thailand and Cambodia in similar and different ways. The effects are nuanced and have broadened my knowledge on global foreign policy, such that, I have a greater knowledge to inform my sociological studies of humanity and inequality.

Advice for future #TerpsAbroad: Talk about YOUR experience in the United States if you are from a marginalized group if you want to give a different narrative. Most locals and travelers I met wanted to know my opinion on the US and politics ,and I felt comfortable sharing what I was knowledgeable about because I have an often misquoted and left out voice not seen in mainstream media, social media, and politics. I only stuck to my country and politics though, not theirs, and I never received any negative reactions from anyone I met.

If you go with other American/Western study abroad students, do not be surprised if some are quite ignorant. I was naïve in thinking that people who choose to go to Thailand would have had friends of other races, cultures, SES, etc. but from what they said and did, I was very irritated at times, being a woman of color, and close to the Black community. My advice is to find a coping method and try to distance yourself from others' negativity because you want to enjoy your time and you will only be around those people for a couple weeks or months before you go back home.

I also had a great travel experience in Thailand and Singapore as a woman, but it was a bit different in Malaysia and Cambodia, for different reasons. Overall, though, it was nothing worse than what I have experienced already, so I looked out for the same things and knew how to be careful from growing up and visiting different metropolitan and rural cities in the US. The people in my program were a range of backgrounds so even with only 21 students, I knew some were also first-generation, queer, and people of color. Unless you're in planned trips and classes, you might want to stay away from the comfort of your English-speaking friends and make new experiences and friends with local people anyways. It's easy to get sucked in to only going out or talking with the people in your program, so be aware and cognizant of what you want out of your trip.

I went to a tourist town in Thailand, but I stayed in a hostel owned by the sweetest Thai woman named Darling. My study abroad program friends came over and we met two American men staying in my room and went out to breakfast together. I got along with them so well that I ended staying with my new friends and a Canadian woman who stayed in my room the next day. My friends had a good relationship with Darling and she invited everyone staying at her place to a funeral for a local Thai woman the next day. Good thing I packed black clothes!

My friends and I got up early and grabbed coffee and then we set out on our mopeds with Darling leading the way to a nearby town where we walked among tables filled with the community that the woman was from. Darling had us help serve them plates and bowls of food and then we went into a house and ate with a group. I used the Thai that I knew to speak with them and tell them a bit about my friends and asked them questions about their town. After we ate, we walked out and the local Buddhist monks were doing chants that I assume was part of the funeral, and then everyone (about 50 people) walked alongside this immense, beautiful structure to bring the deceased woman to the cremation site.

They played music as we walked over a mile into a wooded area, with people pushing telephone wires out of the way of the structure-though it did break a bit on the way. It had begun raining by the time we arrived at the cremation site and the monks spoke and did more rituals with the family and for the woman. While it felt more joyous and celebratory back at the house, by now I could feel the emotions were a bit heavier. My friends and I stood off to the side observing as the funeral occurred. Her close family members began to cry right before she was to be cremated. The woman was cremated for all to watch and small fireworks were part of the structure that went off during the large blaze.

Everyone stayed to watch the blaze, and then we got a ride back to the town in the back of someone's truck. I told my Buddhism professor about the experience the next class and he was glad I was lucky enough to be invited to such a personal event and one that had many aspects of Buddhism that I learned of in our readings and lectures. Darling even sent me a handmade bracelet the next weekend; I am grateful for her giving me that experience and it shows how much she has been welcomed and respected by the members of that community that they would be open to foreigners and non-Buddhists in attendance. Darling is a kind soul and I only wish I could gift her the same kind of experience from my culture, though I might never get the chance to.

Advice for future #Terps Abroad: You can apply for the UMD EA scholarship before you have chosen a specific program. Talk to the people in the EA office regularly, not just before you decide on a program, and a few times while applying, like I did. I would have been able to choose faster and gotten more scholarship money if I had talked to them earlier and more often. I wish I knew earlier that depending on your personal major/degree requirements, you can study abroad in any semester even your last one when you graduate so it’s never too late and the 30 final credits at UMD can be waived by your advisor. Make a budget while you're there and stick to it! Know how much funds you have and what big things you want to make sure you plan for.

I already knew that going abroad, let alone in SE Asia, would be a challenge personally, since I live with major depressive disorder and anxiety. I even had anxiety every day for a week before and during my flight across the world, but once I got there I felt so happy and grateful and busy with all the orientation my program had planned. My semester was different because I was in a split-country program (two months in Thailand and a month and a half in Cambodia) for classes so I technically was taking 6 credits for the first half and then 9 for the next. Finals were not easy, but the easier load of the semester helped me do well in class and have time to take care of myself and explore during the week and the weekend.

I also felt close enough to one of my friends in the program to share about my illness and she shared she also was going through the same. It helped to have someone there to confide in and joke about our mental health, but it was a risk I made based on how open-minded she seemed. Unfortunately, I dealt with the loss of my aunt while I was in my second month there and it definitely made a difference in my study abroad trip, but not so much that I regret anything I did.

I just had to slow down and grieve her death and not feel guilty for socializing and going on trips with friends. What helped was actually going to a psychiatric hospital in Chiang Mai. I had no expectations because even the Thai women who was a leader in our program had certain fears and stigma about mental health, but she was very well-meaning and she translated the registration process for me and waited as I was seen. I was able to speak with a doctor trained in psychology and he understood my grieving and depression.

They gave me another antidepressant and had me come back in for a therapy-like check in on the medicine. It helped ease my mind and I had a better experience than what I was expecting, from multiple Thai and Western advice on mental health in Thailand. I somewhat wish I had chosen to not have a host family in Cambodia, though, because they definitely had a hard time understanding my fatigue (symptom of depression), and would make comments or ask questions even when I would explain, but I understand the stigma around health and sleep and did not take it personal.

After a particularly ignorant girl in my program joked about me falling asleep in class to my host brother, I brought it up to her that I was not okay with that and I had a health issue that I did not feel like sharing openly with everyone in my program and she stopped making jokes about it afterwards. Overall, I loved my program and had more positive moments than negative. Getting through that was a test of my strength and I understand more about my illness in relation to what my limits and boundaries are that I only could have gained from travel/study abroad. I would do it over again a thousand times if I could.