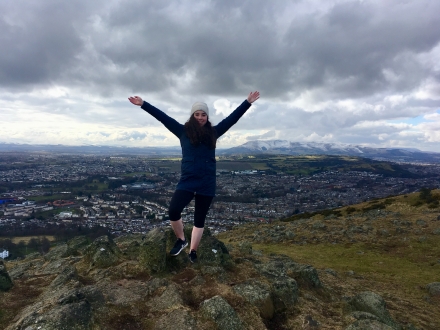 The University of Edinburgh is a very international school, and I met people from literally all corners of the globe. Getting to know people with a completely different worldview is not only fascinating, but also curiosity inducing. I did a group project with students from Norway, Mexico, and Scotland, heard the Scottish perspective on Brexit, and debated politics with my French roommate. I've since decided I had to continue putting myself in this kind of international environment-- I signed up for UMD's Global Fellows program and I'm considering going abroad for graduate school. Getting this international experience means that I'll never look at world events or other people in the same way again.

Advice for future #TerpsAbroad: It's never too early to start thinking about studying abroad! I realized that there were very specific programs I could go on because I had to take certain classes that semester in order to finish my major requirements. Although I ended up very happy with my final choice, my options were limited, and I only realized this after many advising meetings and a lot of planning on my own. Start thinking about and planning abroad now-- almost anyone can study abroad in some way, as long as you carefully think about how it fits into your schedule. ​

The best part of spending a semester in wintry Scotland is getting to slow down. For example, I spent hours talking to my roommates in our tiny apartment and making food together. When the weather got nicer, students and locals would sit out in the park next to campus and have barbecues until the sun set. My life moved at a completely different pace -- people actually sat and talked to each other at coffee shops, and almost no one took their coffee to-go! I loved experiencing not just the European lifestyle, but also getting to see the world/life through different lenses and becoming an Edinburgh local.

Scotland is SO COLD. There was a day where I was so happy to sit outside in the park because it was the warmest it had been in months, which was 49 degrees. When I arrived in January, the sun set at 4:30 pm. Be prepared to adapt and make the best out of situations beyond your control-- everyone in Scotland was dealing with the same lack of sunlight, so I had to deal with it too. ​