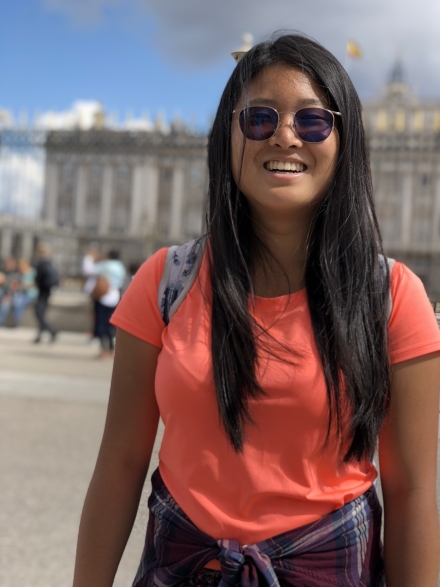 My study abroad experience was above and beyond what I thought it would be. The first few weeks of settling into Edinburgh was fun for me, because I got to go buy bedding, pots and pans, register for my classes, and set up a bank account. I realized from this experience that I could be independent and handle all the "adult" tasks by myself. After settling in, I explored Edinburgh by foot every weekend to get to know the city and soak in the deep history that it has. Being open minded allowed me to dive into the local culture and experience their food and tradition. Side note: I have to make it clear that I LOVE haggis.

I took advantage of the close proximity to explore mainland Europe. Life is too short to wait for others, so I decided that traveling solo was the best way to explore the world. I had the opportunity to engage in conversations with local people and people staying in hostels. Little did I know that these conversations trained me to improve my interpersonal skills and be more confident in speaking to everyone even with language barriers. An extra benefit to that is now I have friends literally all over the world. Another thing I learned about myself while traveling abroad is that I am very spontaneous. Surprises always make traveling way more fun than it already is. Some of my unforgettable memories are sitting in the park in Salamanca, Spain conversing with an old lady who knew no English at all, and getting a free 4 hour car ride from Mostar, B&H to Dubrovnik, Croatia. But this is not to say that I did not face any problems being spontaneous. Though I did learn that I am my own best advocate and that there is nothing that I cannot problem solve by myself. The first step to solving any unanticipated problem is to remain calm, then think through the next steps. I can ensure that adaptability and self reliance will help me as a future physician to become a better advocate for my patients.

Advice for future #TerpsAbroad: I never had a problem being a women and person of color in Edinburgh, because the student population is quite diverse. However, I did take a little more precaution being an Asian woman traveling solo throughout Europe. I did have a few experiences of feeling discriminated against, but most of the time I was a little more annoyed at getting stared at all the time, particularly in Eastern Europe. Because ethnicity is such a huge part of the European population makeup, people will say "You don't look American." I would advise you to challenge their beliefs and respond with "Yes, I am American, and we are diverse."

Regarding being a pre-med biology major, studying abroad is 100% doable if you start thinking about it early and see how it fits into your 4 year plan. Surprisingly, being a pre-med while abroad was way more interesting. Because most countries have 6 year medical schools right after high school, I was allowed to attend undergraduate medical conferences that occurred throughout the UK. The conferences allowed me to listen to doctors of different specialties, which helped me confirm that I do want to enter the medical profession in the future.

You would not expect how kind strangers are. From the grandmas, to the construction workers, to the couples sitting in the park, and to the strangers just strolling on the streets. Some of these people have reached out to me to ask if I was lost and needed to know how to get somewhere, while some were so patient in answering my questions. One particular instance in Lisbon, Portugal, I was extremely confused with why there was a protest going on. I lingered around the area for about half an hour and decided to ask someone. Somehow I was very lucky that the person I chose to ask is an English teacher in Porto, Portugal. She so patiently explained to me how the education system works in Portugal and how the government is taking money away from the education system. She talked about the goals of the protest that occurs every year and what she hopes she could see in the future of education. It was a very unexpected time and place to be learning about a social issue within a foreign country where I was in for a week. After this very positive interaction, I sought out more opportunities to converse with locals to learn more about their perspectives and beliefs. If you are studying abroad in the future, the best advice I can give you is to be open minded and initiate a conversation with locals because those unexpected knowledge you can gain are what you will cherish forever.

Advice for future #TerpsAbroad: There are a lot of myths surrounding study abroad. People often think that it is not possible to study abroad because they do not have the money to. I get questioned about where my money comes from all the time. This is a perceived barrier that has solutions that you need to go research and seek out for. There are numerous scholarships out there to sponsor your tuition, your travels, and academic related pursuits. Even if the scholarship looks "hard to get," you never know until you try. I highly encourage anyone who wants to study abroad to browse the scholarship list on the education abroad website and apply to as many as you can. You can also talk to an EA advisor to get more information about the scholarships. In addition to applying to scholarships, make sure you have a budget that you stick to. I have a loose budget for each semester, then I break it down to budget per month. By having my budget flexible between months, I could spend less while staying in my dorm, while have a larger budget for traveling.

The hardest part about studying abroad is adjusting to the academic culture. Because I took third year biology courses, the professors expected everyone to know how to write essays and to know the format of the exams. It was my first time having to write academic papers for biology courses. Even my advisor at University of Edinburgh warned me that US students particularly have a hard time with the assignments because we do not write any essays for our science classes. It was definitely true for me. I struggled very hard on my first essay especially since the professor allowed us to choose our own essay topic. Another challenge on top of that is the professors do not remind you or say anything about the essays during class. They expect you to know what to do and get it done. I did complain a lot about it in the beginning; however, I came to embrace this type of learning. It was all about having self-motivation to research my own topics of interest, which made me learn more about the subject.