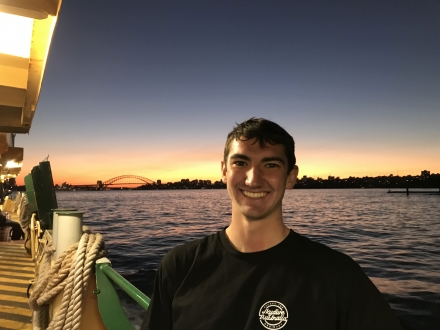 I was impacted the most by the people that I met. I stayed in a dorm with only exchange students so I met loads of people from all around the world. I thought it was so interesting to see all of the cultural differences that everyone had. However, the most fascinating part was how similar we all were. We all were very friendly and outgoing, we liked to travel, and despite coming from different backgrounds and countries, I was amazed by how much we all had in common.

Advice for future #TerpsAbroad: As someone who has only really met Americans all my life, I would encourage everyone who is considering going abroad to do it, because you will meet people from all over the world and see their different perspectives and points of view.​

One moment that I thought was really awesome was at the end of semester, we all gathered in the common room of our dorm and just sat and talked all night. We reflected on all of our experiences and memories, and we were obviously very sad to leave. Everyone agreed that we should do a reunion trip in the near future. I thought that this was such a great moment because we all realized how fast the semester had just flown by and we wanted to spend as much quality time with each other in the final moments as possible.

Advice for future #TerpsAbroad: I thought it would be too expensive to study abroad, but the exchange program makes tuition the same cost as UMD. All expenses considered, I spent about $5000 more abroad then I would have at UMD, but it could have been done for the same cost as a UMD semester (I spent a small fortune traveling around Australia).