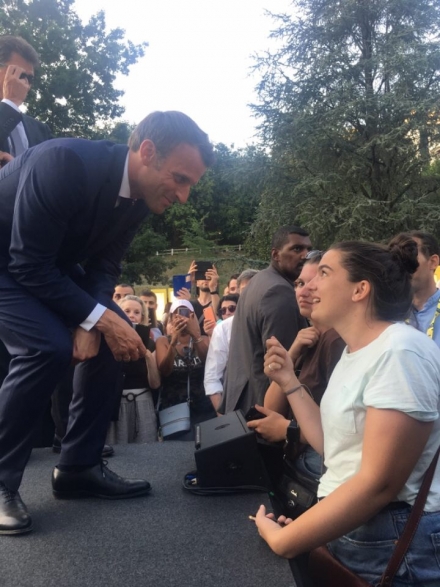 I knew I wanted to come to France for a while now because I wanted to improve my French speaking skills. My goal is to have a career in the field of international relations, so I’ve been working on becoming multilingual to create more opportunities for myself. I can already notice after only two months that my French skills have improved drastically. Everyday I have three hours of French class, but the best classroom is when I go home at night and am forced to speak French with my host family. I definitely feel more confident with my French skills and I know that will carry through with my courses at UMD and with my future career.

Advice for future #TerpsAbroad: I think it is important to take your identity into consideration when you choose a place to study [abroad]. There are definitely cultural nuances everywhere that may make things more difficult. For example, in France, things are supposed to be super secular. No one is showy with their religion, which is a stark contrast to the states. This is why I took off my religious jewelry before going because no one really shows their religion in that specific sense. I would recommend doing research on the relationship between your most important identities and the culture of the country to make sure you’re not shocked upon arrival.

I was lucky enough to have the opportunity to meet the president of France, Emmanuel Macron. The best part was that I spoke with him in French! C’était un truc de fou (translation: It was crazy)! Macron happened to be in the same city as me because he was inaugurating a new statue for the 100 year anniversary of the maillot jaune (yellow jersey) in my city. My friends and I went early enough that we were able to get inside, be interviewed by a regional newspaper, and finally, meet Macron. We made our way through the press to where Macron was standing on the stage and it was then that we were able to grab his attention. My friend and I continued to say that we were studying policy, specifically on an international scale and that we were so happy to be speaking with him. Macron was so kind and patient with my French! When he heard that we were American, he tried to get the old American champions over to see us, but he was pulled away by his security. I think I was in shock that entire time that I was talking to him and for a few days after! It was so unexpected! This was also something that boosted my confidence in my speaking skills. If I can speak to the French president in French, I can speak to anyone in French! It was an unforgettable experience and I feel so lucky to have gotten the opportunity to be in Pau for the summer or I would’ve never met Macron.

Advice for future #TerpsAbroad: With all the programs that exist today, you are bound to find something that suits your needs. All majors cross borders and I know for a fact that your educational experience will be so much better when you study abroad. You never know what might happen when you’re abroad!

The hardest part about studying abroad was adjusting to the language differences. I have been studying French since middle school but it still was a lot of work at first to constantly speak French. Everything takes hard work and time before it gets easier. Hardships like language barriers are surprisingly easy to overcome when you’re given the time to really focus on improving your skills. Study abroad gave me that ability for sure and now it seems more normal to be speaking French all the time.