One of my favorite things about France and French culture is the film scene. For over 100 years, French filmmakers have used movies to entertain audiences, pose difficult questions, and reinvent a relatively new and ever-changing medium on an international scale. From creating the very first movie ever made (L'arrivée d'un train by the Lumière brothers in 1896) to introducing immensely influential movements (like le Réalisme Poétique or la Nouvelle Vague), French films have consistently expanded the world of cinema and its possibilities as an art form.

In addition to their influence internationally, French films offer a pointed reflection of French society, showing both the wonder and daily fantasy of life in France (take Amélie, 2001), as well as deeply rooted issues within French society like racism and classism (for example, La Règle de Jeu, 1939, an examination of class struggle, or the impact of education inequality depicted in Entre Les Murs, 2008).

Between consistently holding a spot in the vanguard of international cinema and making bold statements about contemporary life, French film culture offers endless possibilities. No matter what you’re looking for––wistful romance, hard-hitting drama, social critique, adventure, fantasy, art–you can find it in French film. Lately, I’ve been using this time in quarantine to dive back into some great French films and wanted to share my favorites!

This film follows the friendship of the titular Jules and Jim over a 30-year period including la Belle Époque in Paris, the First World War, and––most notably––their time with Catherine, a young woman who captures the imaginations and hearts of the two best friends. Catherine is independent, unpredictable, and immensely charming. It is clear to both the audience and to Jules and Jim that this woman has the power to shape the course of their lives. Paired with Catherine’s dynamic personality, director Francois Truffaut uses innovative techniques throughout the film like handheld cameras, freeze frames, and panning shots to capture significant movement. This film’s exceptionally energetic and fluid style makes it what some consider the height of the French Nouvelle Vague movement.

The performance of Jeanne Moreau as Catherine steals the show, but watch this movie for its influential place in filmmaking history, as well as the absolutely beautiful relationship between best friends Jules and Jim.

Available for $3.99 on iTunes or Amazon Prime

La Haine is a sharp and pointed social commentary on the racism, classism, and inequality that plague the Paris banlieues, the suburbs of low-income communities outside the city. The film centers on three young men born and raised in these communities for a 24-hour period, following a night of riots in response to the hospitalization of a young Arab man in police custody. Over the course of these 24 hours and the misadventures of the young men, the audience witnesses the violence, brutality, and desperation that often characterize life in the banlieues. Filmed with an erratic style that includes rapid cuts, dramatic closeups, and a severe black-and-white color palette, the film exposes society as a ticking time bomb that will inevitably end in destruction.

La Haine offers a stark and uncomfortable glimpse into how racism and discrimination are perpetuated in France and the devastating impact of these deep-seated issues on an entire generation.

Available for $3.99 on iTunes or Amazon Prime

Fair warning––this movie is bizarre. Delicatessen features a post-apocalyptic world where a local butcher trades in human flesh and is also the landlord of a tenant building above the butcher shop. Protagonist Louison moves into the tenant building as the new handyman looking for a fresh start. Little does he know, the landlord has another use for him––one that involves Louison on the butcher block. Those undeterred by the bizarre plot will find a wildly creative dark comedy that constantly defies expectation. Through the course of the film, audiences meet the host of tenants living in the building, each with their own idiosyncrasies and unusual character traits, ultimately building to a wealth of nightmarish humor.

The directors of this film, Marc Caro and Jean-Pierre Jeunet, later went on to make Amélie. (For those that have not yet seen Amélie, stop reading now and go watch it!). If you enjoyed the fantasy and delightful originality of that movie, I highly recommend the eccentricity and quirky charm of Delicatessen.

Available for $3.99 on YouTube, Google Play, iTunes or Amazon Prime

Paris, Je T’Aime is not technically a French film. Rather, it is a compilation of shorts featuring an international ensemble of directors, actors, writers, and producers. Some highlights include Gérard Depardieu, Natalie Portman, Alfonso Cuarón, Wes Craven, Juliette Binoche, Isabel Coixet, the Coen Brothers, Fanny Ardent, and many more. The two-hour film includes 18 different shorts, each taking place in a different arrondissement (neighborhood) of Paris. While some shorts are absolutely delightful and some are lackluster, each reveals a specialsneak-peek of the many unique and inimitable corners of Paris, culminating in a stunning representation of the world’s most romantic city.

For those looking to explore Paris from the comfort of your couch, start with Paris, Je T’Aime. 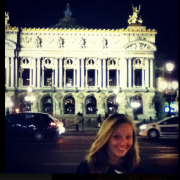 Kristen Mitsinikos is a member of the Short-term Programs team at Education Abroad. Kristen graduated from Goucher College with a double major in International Relations and French. As an undergraduate, she studied abroad in Paris, France, and the Volta region of Ghana.