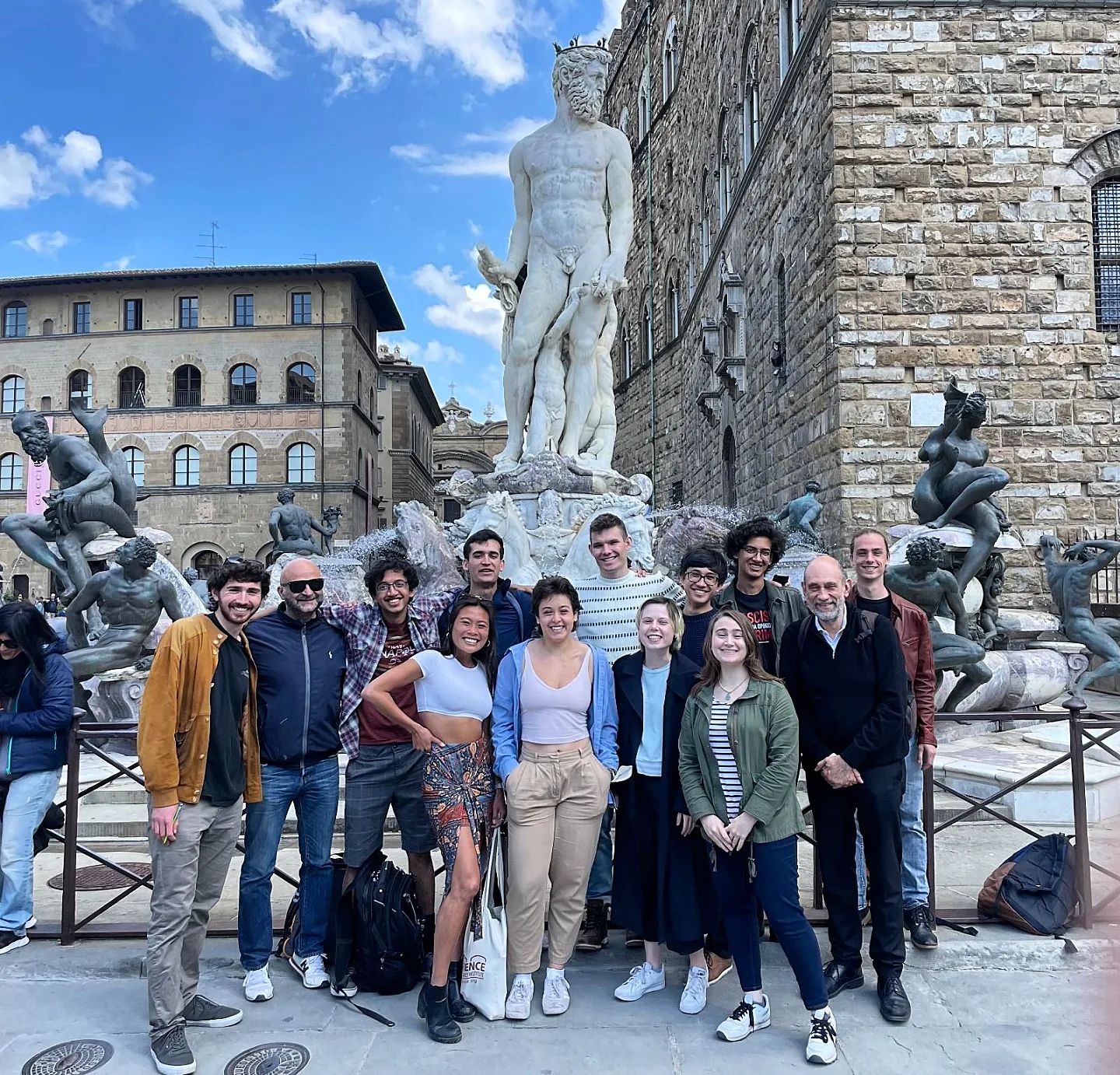 Terps are once again seizing the opportunity to study abroad, with over 400 students participating in programs this spring. As participants begin returning home, we highlight a shining example of partnership with the University of Maryland’s academic departments and an international organization that has integrated global learning into the curriculum at UMD.

Maryland-in-Florence (PHYS), with its careful academic design including visits to physics facilities across Europe, stands as an increasingly successful Education Abroad program founded in collaboration with ISI Florence, a strong institution partner overseas. In the historically and culturally rich physics epicenter that is Italy, students are able to expand their worldviews and gain critical cross-cultural skills that will inform their STEM career.

Ross Lewin, Associate Vice President for International Affairs, explained how the rich resources and history of physics and math—and a number of famed physicists—made Florence a fitting destination for students studying physics. While there, students are able to enjoy site visits such as the European Organization for Nuclear Research (CERN) in Switzerland, the Galileo Museum, and the Gravitational Wave Observatory in Pisa.

In Florence, all Physics students take a lab course, key physics and math courses, and an Italian course. They also have the opportunity to take an elective, which many students use toward an art history or art studio course. Students in the program this spring were able to choose between two tracks based on where they were with their Physics degree—an effort to serve the needs of Senior students who required upper-level courses to meet degree requirements.

Current Maryland-in-Florence student Ekaterina Poliakova-Georgantas took advantage of the new second track this spring, after her plans to study abroad earlier in her college career were halted by the COVID-19 pandemic.

“I was originally supposed to [study abroad] the semester after COVID hit, but obviously that was not possible,” she said. “So the physics program added a second upper-level track, I think, so that students like me could still go.”

The Maryland-in-Florence (PHYS) program was developed by Lewin and Betsy Beise, Associate Provost for Academic Planning and Programs. With Maryland-in-Florence already established with partner institution ISI and an existing general studies and architecture program, Lewin began to consider using the site for other academic tracks in 2016.

“UMD has a lot of science students who, generally speaking, don’t study abroad,” Lewin said. “I saw the demand and wanted to create a Physics program abroad that was integrated into students’ academic experience.”

After gathering physics faculty, administrators, and advisors to conceptualize the program, Beise tapped Professor Luis Orozco to teach the students in Florence. The program is one of the few Maryland semester programs with UMD faculty on site. Poliakova-Georgantas, a junior Physics and Math double major, attributed her appreciation for the program to Orozco.

“Professor Orozco was a magnificent professor,” said Poliakova-Georgantas. “He was incredibly knowledgeable about various areas in physics, not just his own, and he really cares about students' learning—so he’s pretty rigorous in everything that he teaches and is very passionate about it.”

Orozco has taught six courses in Florence, but also serves as something of a regional expert to students in the program.

She also credited Orozco with providing students access to Pisa’s Gravitational Wave Observatory this spring, a trip that was integrated into the curriculum of the physics students when the CERN site visit was canceled due to COVID-19.

Caption: Inside the Gravitational Wave Observatory in Pisa. Photo provided by Ekaterina Poliakova-Georgantas

“His connections are what got us into the Virgo interferometer, which was insane,” she explained. “A lot of us were excited for the CERN trip, so we were disappointed that it had been eliminated from the program, but he managed to work his magic so that we could go. It was an amazing trip.”

Orozco, with his great understanding of Italian art, history and culture in addition to being a physicist, is known to uniquely enhance the Maryland-in-Florence (PHYS) program.

“I think a lot of time, physics and art go hand-in-hand,” said Beise, who is also a physicist. “And this program being based in Florence, and with Luis being such the Renaissance man that he is, really connects those bridges.”

ISI Florence also provides faculty to teach physics and math, many of whom are adjunct, world-renowned physicists.

“It often happens that one can be a great scholar but a poor teacher or maybe a great teacher but not a scholar at all,” said Stefano Baldasarri, Director of ISI Florence. “When we select our faculty we try to bring together those two components.”

A common emphasis in ISI is the potential to network for students, showing them the world of physics as researchers and lab members working alongside the professional physicists.

“It’s very important when you have to teach physics to other students—to talk with them, not only as a professor, but as a colleague, or as a friend,” said Emanuele Tognelli, ISI Professor of Mathematics and physicist.

“It is also useful to introduce our colleagues to students and invite colleagues to discuss something different,” Tognelli explained. “We have [connections to] a lot of experts that can discuss different fields of physics with our students.”

The Maryland-in-Florence program was carefully developed between the Physics department, Education Abroad and ISI to design tracks that offer global learning in ways that meet students’ degree needs. A key feature of the program is its assurance that students will be able to take the courses that they need abroad, without needing to reevaluate their major or degree plan.

“I think that's an important message,” Beise said. “That you can make this work without compromising the campus program for learning opportunities for students.”

Tom Gleason, the UMD Physics academic advisor, was essential to the development of the program and designed the curriculum selection with students.

“What really allowed this program to scale was Tom’s knowledge of how students selected and sequenced their coursework to meet requirements for the major,” explained Leeanne Dunsmore, Director of Education Abroad. “Once we were able to get coursework pre-approved for resident credit and align the offerings in support of graduation requirements, the program really took off.”

This deliberation of academic advancement ultimately increased the population of students that could be involved in the program.

While physics as a major department at UMD struggles to attract female students, the Maryland-in-Florence program houses a proportionate number of students who are women. Out of the 10 students who participated in the course during the spring of 2022, three were women—above the average for Physics majors. At the same time, Maryland-in-Florence also helps increase the number of male students studying abroad.

Poliakova-Georgantas emphasized the importance of STEM majors taking courses abroad, not only to experience the study of physics in a new environment, but also to develop cultural competence and familiarity with people of different backgrounds.

“I think STEM is a very international kind of venture, especially when it comes to physics,” Poliakova-Georgantas said. “There’s something to be said about having laboratories all over the earth, like the one we visited–it’s one of several facilities that work in the same way, to take the same measurements. And so, because of this international aspect to physics in particular, it’s important to know how to interact with people of other cultures.”

In partnering with international organizations and generating global opportunities for students, Maryland-in-Florence provides not only academic integration and visits to world-renowned facilities, but also promotes a multicultural worldview from the location of Florence as a physics epicenter.

“The community of science is an international community,” Beise said. “We have to embrace and be ready to embrace multiple points of view, multiple cultures. You never know where the next big idea is going to come from.”

Applications are currently open to apply to Maryland-in-Florence (PHYS) for the Spring 2023 term. To get started, students can schedule a meeting with Physics advisor Tom Gleason or EA advisor Lindsey Sitler.

Correction, May 24: This article previously stated that Maryland-in-Florence (PHYS) was the only study abroad program with University of Maryland faculty on site. The article has been updated to "one of the few Maryland semester programs" with consideration to our Maryland-in-Nice program and faculty-led short term programs.