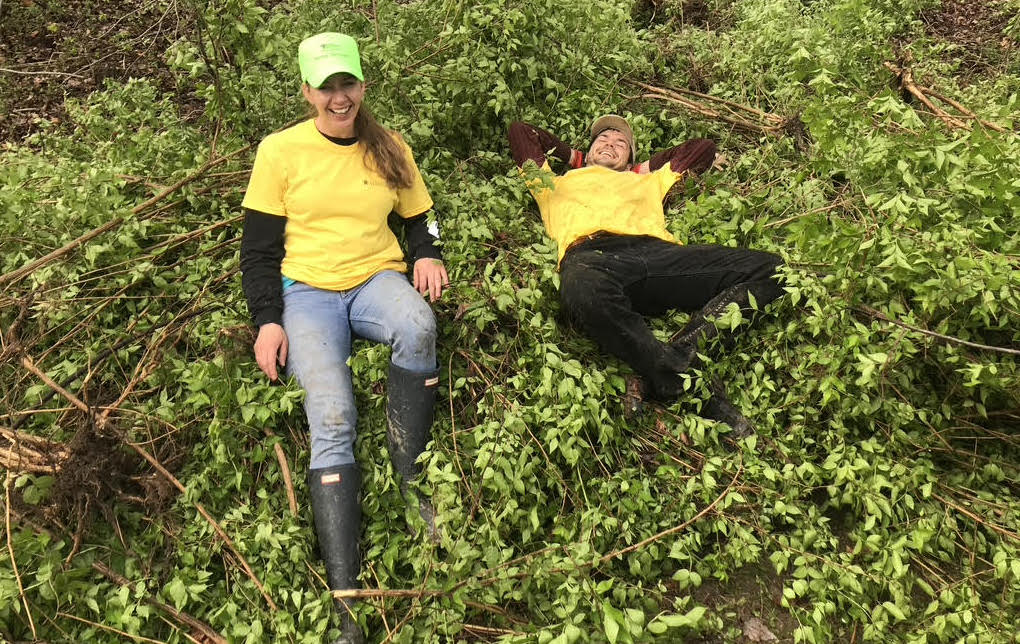 International Ph.D. student Krisztina Christmon launched her award-winning idea of repurposing farm plastic as part of a university innovation challenge in 2020. One year later, she serves as CEO of Repurpose Farm Plastic LLC, a company developing sustainable plastic recycling practices in the field of agriculture.

Christmon is a fourth-year Ph.D. candidate conducting research within the University of Maryland’s Department of Entomology where she studies the parasites of honeybees in Dr. Dennis vanEngelsdorp’s lab. She earned her previous degrees at the University of West Hungary and the University of Exeter in the United Kingdom. She became involved in combating pollution through the Surfrider Foundation, a national group with whom she began organizing cleanup events and witnessing the effect of pollution on local waterways.

When the College of Agriculture and Natural Resources tasked students with repurposing out-of-service poultry houses for the Fall 2020 AgEnterprise Challenge, Christmon entered with a proposal for washing-sorting-recycling facilities for used plastics. Her idea of establishing agro-plastic recycling plants won first prize, followed by projects involving a hydroponics farm and an aquaponics farm.

She now runs Repurpose Farm Plastic LLC with Benjamin Rickles, the company’s CTO and fifth year Ph.D. student in UMD’s Neuroscience and Cognitive Science program. While his background is in psychology—he studies neural processes in reading comprehension—Rickles joined Christmon out of commitment to  his long-term goal to build a plastic recycling machine. According to his biography on the Repurpose Farm Plastic website, he has a collection of napkin sketches depicting cleaning machines.

Increasing the value of recycled agro-plastic to further sustainable farm practices is listed as the company’s forefront mission, and Repurpose Farm Plastic LLC notably aligns itself with the United Nations’ Sustainable Development Goals—particularly Goal 12: Responsible consumption and production. The pillar is described as one that encourages reducing, reusing, and recycling at the workplace—exactly what Repurpose Farm Plastic LLC aims to do on behalf of plastic consumers in agriculture.

“When it comes to plastic, the United States—and everything in the United States—has to adapt to be ahead of the curve,” said Christmon. “It’s interesting to look to international rules for some sort of guidance.”

“A lot of what’s going on, I feel like, is like we’re relying on a lot of altruism,” added Rickles. “The purpose of our company is to develop technologies and good systems for recycling. We’re trying to meet that point where sustainability is both ecological and cost-effective.”

The recycling and repurposing processes that the company is considering after the research they’ve conducted so far, he said, seems to decrease energy expenditure. Not only is this good for the environment, but it’s important for keeping the price of recycled plastic down. Part of the current urgent concerns for Repurpose Farm Plastic LLC is education and outreach for agricultural plastic consumers, especially in cases where farmers still burn their plastics as a cheap means of discarding waste.

“What happens in some cases is, farmers burn the plastic, and those gasses and chemicals that are released—unfiltered—add to the greenhouse emissions and cause climate change,” explained Christmon. “Repurposing is the best option.”

With thousands of farmers in the Eastern Shore, the University of Maryland Extension (UME) has provided Repurpose Farm Plastic LLC with networks of county agents who connect them to farmers interested in participating in repurposing initiatives. The challenge, Rickles explained, is offering their services to farmers while also managing expectations.

“Part of the difficulty has been to talk to farmers in a way to get information about what they need, what they're interested in, but not to promise them that we have a solution for them just yet,” he said. “So the ones that we've partnered with are very intimate relationships. Saying ‘Hey, this is what we're doing—we just want to do experiments.’”

Christmon and Rickles’ status as students have benefited the company’s development in several ways—not only are more people willing to speak to them because they are students, but many of the university’s resources have proved valuable in building the company’s network and presence in Maryland.

“One thing about being students is that we’re able to partner with the university education centers,” Rickles said. “The university has research farms all around the state. And because we’re students, we’re able to connect with them, they’re letting us use some property. And that’s the kind of thing that wouldn’t be available to us if we had graduated.”

While they admitted that launching a business as a student has as many benefits as setbacks—emphasizing the importance of making time for sleeping and eating well—these available resources have made for a successful first year for Repurpose Farm Plastic LLC.

“It was actually a perfect time for us,” Rickles said. “The university has given us the training wheels, and we can branch off.”

As they look toward what’s next for the business, Christmon feels her academic trajectory has enhanced her business tactics so far, and will continue to complement her abilities as she runs the company.

“How to gather data, how to do the research, how to network—all the skills are transferable to this business,” she explained. “And [with] what I learn in the business now, for example, going out and meeting people and presenting my research… I feel like I have better confidence and also better able to network in that setting. They build on each other and add to each other.”

Rickles hopes he’s able to mesh his research and passions in a similar way, balancing his future in neuroscience with his future in the business.

“I feel like I get to measure the impact of what my neuroscience work would have on the world, versus what this recycling project has on the world. And I'm excited to see which one would be better.”

International Coffee Hour
Study Abroad 101
What is study abroad? How does it work at UMD?
END_OF_DOCUMENT_TOKEN_TO_BE_REPLACED