Did you know that smallpox killed more people in the twentieth century than all the wars in that century combined? Or that the eradication of smallpox was the result of years of combined international action that resulted in an exponential leap in average lifespans around the world? It was certainly news to much of the audience at the Stamp Student Union that arrived to hear Pulitzer, Peabody, and Polk prize-winning science-journalist Laurie Garrett speak about “Zika and the Collapse of Global Public Health” on Monday, October 17. Garrett’s illuminating, one-hour lecture, hosted by the School of Public Health, was equally enthralling, temperate, and well informed.

Garrett has been a senior fellow for global health at the Council on Foreign Relations in New York since 2004. She started reporting on science news at radio station KPFA while she was a Ph.D. researcher, fell in love with it, and never looked back. Garrett never finished her doctorate, but has been awarded four honorary Ph.D.s: from Wesleyan University (Illinois), the University of Massachusetts (Lowell), Georgetown University, and the Mount Sinai Icahn School of Medicine. 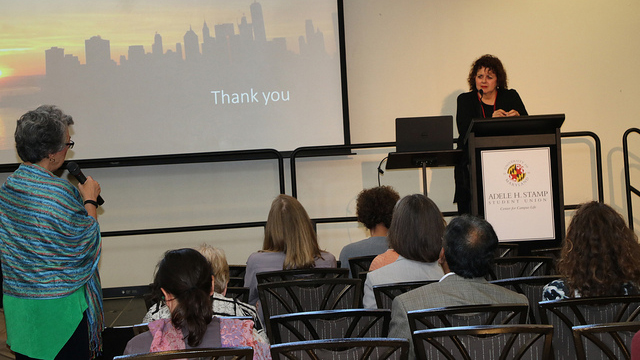 Ranging from the U.S. in the mid-19th century to central Africa today, Garrett’s lecture was a tour-de-force of meticulously researched and, at times, alarming information, outlining some of the history of the growth of public health institutions and changes in public health statistics since the mid-19th century. “It’s easy to get bogged down and, especially in my talks, to get depressed,” she noted but brightened the audience by explaining that, “all over the industrial world life expectancy is rising … we’ve seen child mortality plummet so dramatically even in the most desperately poor countries of the planet largely because of improvements in nutrition in water quality and of course, vaccination … We’re heading towards a world where children can be expected to grow into adulthood … Mass vaccination has had a dramatic impact. And don’t let anyone get away with telling you that vaccines cause autism,” she said to laughs from the audience.

That, however, was the limit of her positivity. Starting with a description of the spread of Ebola and the international response to it, which she termed wholly inadequate, Garrett emphasized the perspective that public health truly is a global, transnational issue that requires international coordination and responses. Since the 1990’s, Garrett said, “we’ve seen far more outbreaks, far more not only [in] an increase in the frequency of outbreaks but also in the severity of some of the worst of them, and this is a trend as surely as a trend of rising life expectancy.” Trust, as Garrett pointed out, is the key to maintaining a comprehensive global healthcare system, and that trust has been severely eroded in past decades despite attempts to coordinate between countries. “The World Health Organization today has far less funding when adjusted for inflation than it had 40 years ago,” she notes.

In a sobering account of the Zika virus and its effects on mothers and children, Garrett’s emotions were clear as she described in detail the effect of the virus on children.  Many of them already infected with the disease “we know they’re doomed,” she told an audience silenced by the severity of the effects she described.

But the talk ended on a more positive note as she told the gathering that the hope existed to create a better world using science. “All the children of the world could have a reasonable opportunity to live to adulthood. I think the world could also see life expectancy extended, even in Sub-Saharan Africa. These are the hopes of the future as we go into this future of sustainable development goals, of trying to deal with climate change and of all the great crises to the planet, which cross borders and require massive amounts of money to address.”