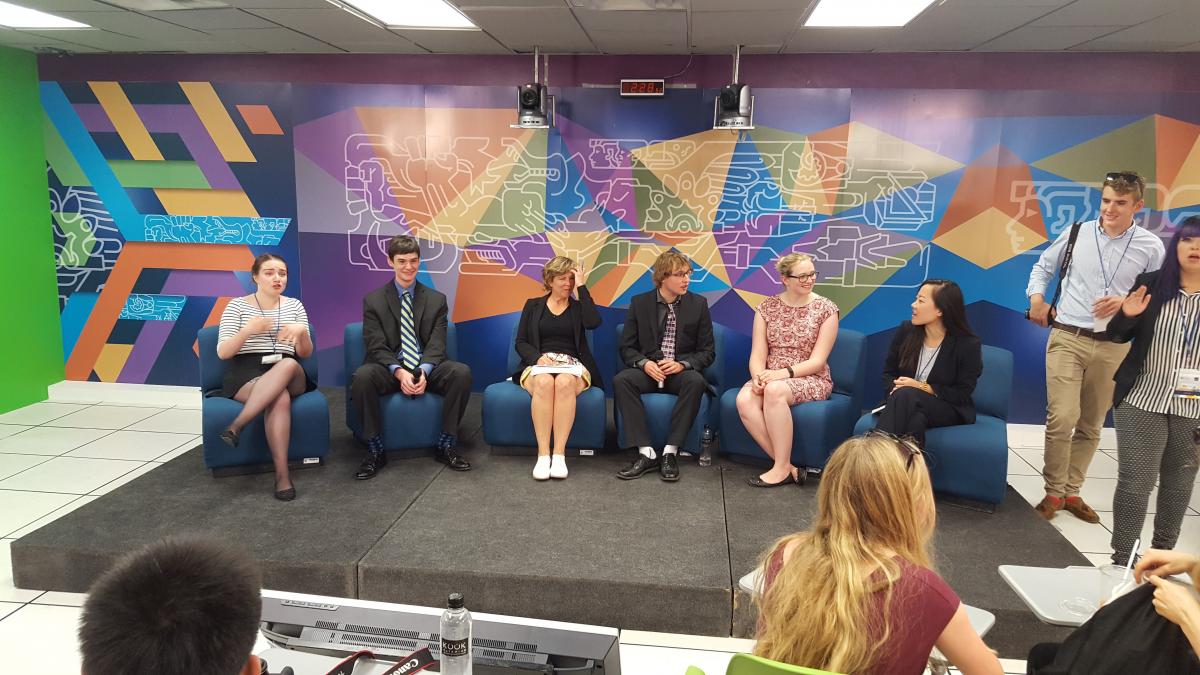 Tom Mumford (‘18), Casey Lim (‘17), and Melanie Zheng (‘17), undergraduate students who are part of the GEMSTONE program at UMD, recently had a chance to explore Monterrey, Mexico, as attendees at the U21 Undergraduate Research Conference. Hosted by Tecnologico de Monterrey, the subject of the gathering was ‘A Global Perspective on Ageing Societies’. These UMD students’ experiences highlight the unique opportunity that the Universitas 21 program offers for UMD students to share research, experience different cultures, and socialize with other exceptional young minds from around the world—perhaps forging lifelong friendships in the process. Tom and Casey spoke to the Office of International Affairs (OIA) about their time in Monterrey.

Tell us a little bit about your research and what you hoped to achieve at the conference.

Tom: My Gemstone team is researching the potential for engineered extracellular vesicles for the treatment of Osteoarthritis (OA). Current treatments for OA only treat symptoms, rather than the underlying causes of the disease. By harnessing existing intercellular communication networks, we aim to develop an OA treatment that treats the underlying biological causes of the disease.

This would be the first time our research would be presented before researchers outside of the University of Maryland. I wanted to represent my team well, and I hoped that our research would be well received.  In addition to presenting, I was eager to see the other research. I was especially interested in seeing non-hard science research being presented academically, which was a new experience for me.

Casey: I am a part of team VESSEL, which stands for Vascular ElectroSpun Silk Engineered Linings, and our research is to develop an improved small diameter vascular graft using electrospinning and biochemical modifications for the treatment of articular cartilage disease. I hoped to be able to share the research that my team has completed through the oral and poster presentation sessions. I also hoped to learn more about different types of research relating to the theme of aging populations.

What was your first impression when you arrived?

Tom: When I first arrived, I was blown away by the city. It sprawled out in every direction, blanketing the surrounding terrain until it reached the bottoms of the mountains that ringed the city.

Casey: My initial reaction when I arrived was surprise at how many individuals from different countries were participating in the conference and how open and enthusiastic everyone was about being at the conference. I was impressed by the location as Monterrey has beautiful mountains surrounding the city, and the hotel was conveniently located next to the Tecnologico de Monterrey.

Did you appreciate the research aspect or the human aspect of the conference more?

Tom: While the research aspect was excellent, the human aspect was unbelievable. Even just the first evening, only a few hours after touching down in the city, I had met so many people. Friendships followed effortlessly, and after a few days, we felt like we had known each other for years.  Now I have friends all over the world! Some have already come to visit, and there are more plans to see people from the conference over winter break.

Casey: While I really enjoyed hearing about all of the different types of research that were being conducted, my favorite part about the conference was the human aspect. It was an amazing opportunity to get to meet people from all over the world and be able to relate to them and form relationships with them. I also really enjoyed being able to speak with the students and faculty from Tecnologico de Monterrey and practice my Spanish with them as well as with the locals that we met during our trip. I learned so much about Mexican history and culture because of the way the conference was set up to include a museum trip and city tour.

How did you hear about the conference?

Tom: Gemstone has sent people to the conference each of the last few years, and sent out an email to Gemstone teams whose research interests could line up with the theme of the conference.

Casey: I heard about the conference through the Gemstone program.

Were your travel, the experience itself, and the process of attending the conference enriching? How?

Tom: The whole experience was massively enriching. The conference had so many fascinating presentations, not just on science, but on psychology, political science, and government policy as well. I found these fascinating, as I wouldn’t otherwise see such research presented academically. As I mentioned, the friendships I made will hopefully endure for years; I’m going to study abroad in Spain next semester, and I can’t wait to tour Europe and visit all the European friends from Mexico. Finally, the culture of the city was amazing! The markets, museums, parks, and views made me want to spend way more than a week there.

Casey: I have had the opportunity to travel to many countries around the world, and because of this I really love to learn about new countries and cultures. This experience was a very enriching experience for me because it was an amazing way to meet people from around the world and share stories and experiences. Because we were a relatively small group in an area that none of us knew much about, we were able to bond quickly through our time together.

Tell us two things you learnt about a different country while you were there.

Tom: I learned that Monterrey was a very American city! Parts of it reminded me of Philadelphia, other parts reminded me of DC. It felt much more like an American city than a strange or foreign place. I also learned a little about the history of Monterrey. It was once a hub of manufacturing and processing, with lots of factories and heavy machinery. It has since evolved, and now lots of the old machinery has been repurposed as artwork in various parts of the city. There was a massive bucket, about 20 feet tall that was in the middle of a canal and had been turned into a fountain.

Casey: I learned a lot about the different perspectives on Brexit as we had a lot of individuals who were studying in the UK. I learned that the educational system in terms of a getting a medical or professional degree in most countries is very different from the U.S. system. I also learned that in many Asian countries, individuals start learning English as a second language during primary school.

Would you go again if you had the opportunity? In the same vein, what is your best memory of the experience?

Tom: I would absolutely go again! It was an incredible experience, and was totally new and unique for me. My best memory was seeing the presentations at the end of the week, when I had become friends with the people presenting. It was so neat to see my new friends jump into their element, and present amazing research that they were passionate about!

Casey: I would definitely attend this conference again if I had the opportunity. My favorite memory from the experience is learning how to salsa dance after one of the group dinners with all of the other participants. The meals generally lasted at least two hours so it was the perfect opportunity to get to know the other participants. The salsa lessons were also a nice break from the scientific aspect of the conference where everyone could let loose and have fun.

What is the one piece of advice you’d give students applying for similar opportunities?

Tom: I would tell students to go for it, and throw yourself into the experience! Do as much as you can while you are abroad and meet as many people as possible.

Casey: My best advice would be to absolutely try your best to be a part of these opportunities and to come into the opportunity with an open mind to learning about new cultures and forming strong friendships.