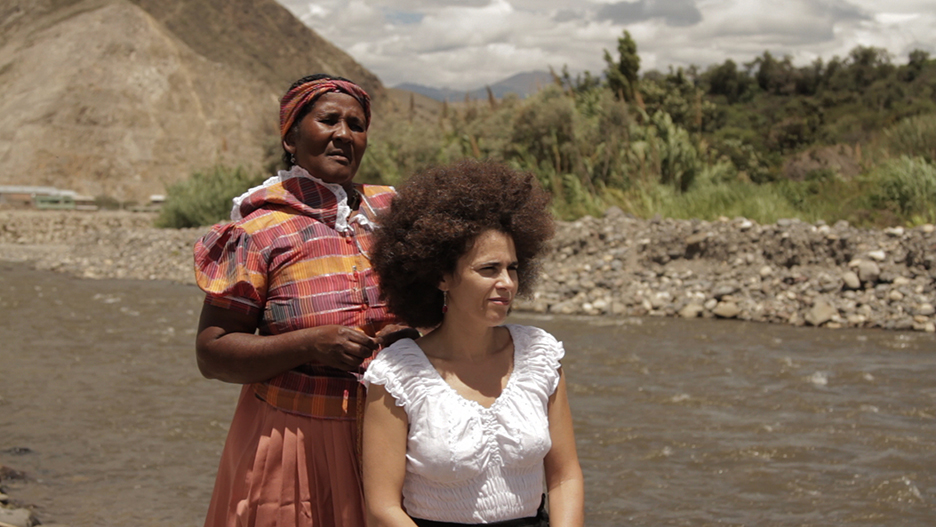 When Karina Aguilera Skvirsky’s great-grandmother María was 14 years old, she began a journey through the highlands of Ecuador to reach the coast, where she could work as a domestic for a wealthy family. At the time, the only way María could get there was to ride a donkey alongside the railroad construction that would one day connect the highlands to the coast.

In “The Perilous Journey of María Rosa Palacios” (2016), Skvirsky documents her great-grandmother’s 1906 journey through her own lens. In the half-hour film, Skvirksy makes the same journey as María, interviewing relatives and historians along the way. The video art installation is part of the current exhibit at the University of Maryland’s David C. Driskell Center, “Moving Visuals,” which highlights contemporary African American artists who frequently and critically explore popular culture, social issues and history. It is part of the university’s year-long Year of Immigration.

The story Skvirksy tells is not one taught in the history books, but it is a journey that was a very real part of life for many Ecuadorians.

“It’s a really important story to tell because it makes an example of what makes it into the public media and what doesn’t,” says junior Kaela Walker Arthist, who works at the Driskell Center. “[These] types of stories should be told but they’re not.”

Skvirksky, a photographer, told the audience at a recent artist panel discussion that she used film to tell María’s story because it was the most impactful way to illustrate the challenges that her great-grandmother had faced.

“If the medium you know isn’t working for what you want to say, then find the medium that will work,” she said.

“The Perilous Journey of María Rosa Palacios” and the “Moving Visuals” exhibit are on display at the Driskell Center, located in the Cole Student Activities Building, now through Friday, Nov. 16.

Photo caption: A still from the film, “The Perilous Journey of María Rosa Palacios," shows artist Karina Aguilera Skvirsky on her migration journey through Ecuador.