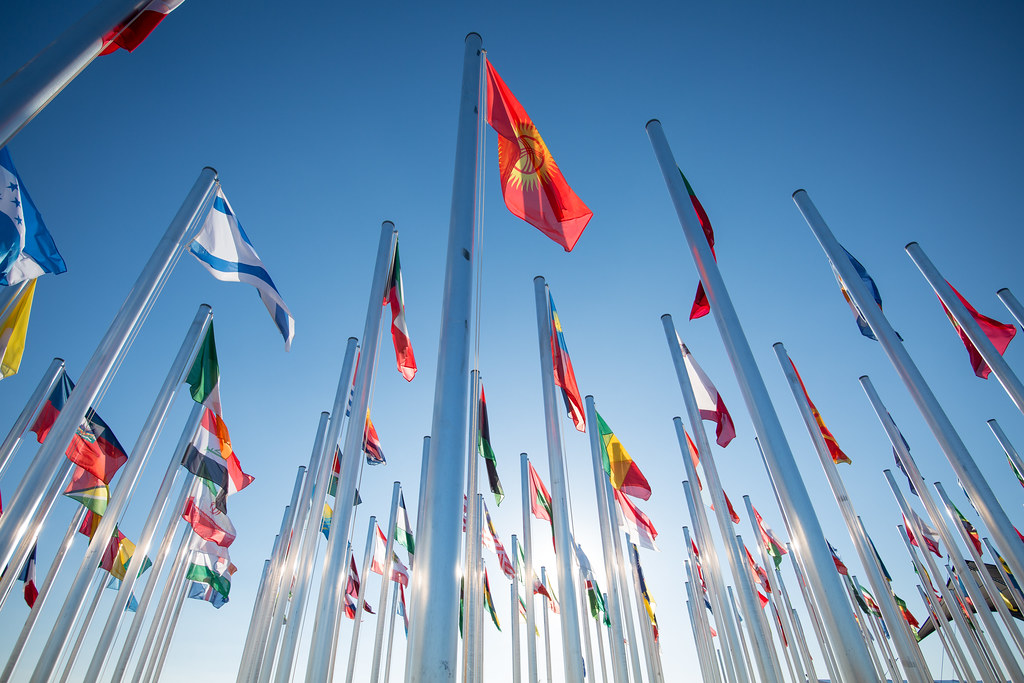 International Education Week (IEW) 2021 saw another lineup of unique events celebrating global learning and exchange across the University of Maryland. An annual initiative of the U.S. Department of State and the U.S. Department of Education, IEW encourages organizations and universities throughout the U.S. and around the globe to organize specific programming during the third week of November to highlight and celebrate the value of international education.

University System of Maryland Chancellor Jay A. Perman issued a statement on International Education Week, emphasizing that, “The USM is dedicated to moving Maryland forward, but our obligation to serve the public good goes well beyond our borders. Indeed, we understand that we are all inextricably linked—that what happens in Maryland affects the world, and that what happens in the world affects Maryland.”

The Institute of International Education (IIE) and the U.S. State Department’s 2020 Open Doors survey, released annually during IEW, reaffirmed the University of Maryland’s status as a leading institution in global learning. In study abroad, UMD ranked 11th in the country for the number of students sent (Fall 2019 to Summer 2020). The university is ranked in the top 20 universities for the delivery of mid-length programs, 11th in short-term study abroad programs, and is a 20-year top producer of Gilman scholars, a U.S. government grant program that enables students of limited financial means to study or intern abroad. 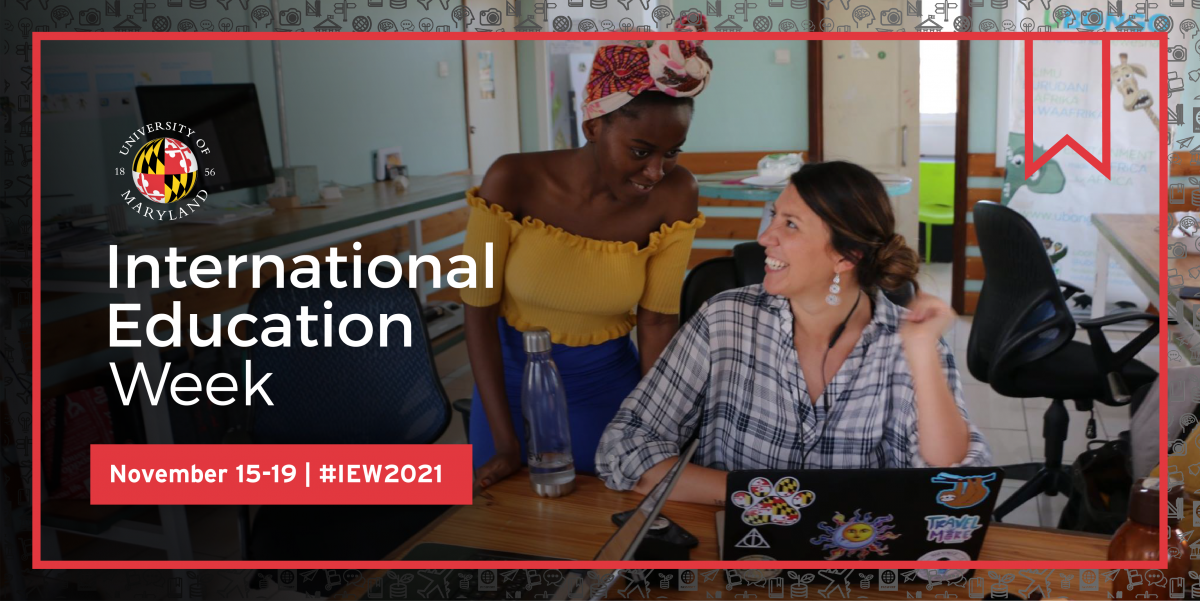 The UMD calendar of International Education Week events kicked off on Monday, Nov. 15 with an all-day global business celebration in Van Munching Hall, the first of several IEW events at the Robert H. Smith School of Business. In the afternoon, the Department of English hosted Kennesaw State University professor Cécile Accilien, who presented "France, the U.S. and Haiti: Beyond the Single Narrative of the First Black Republic,” a lecture on the destabilization of Haitian democracy, the dangers of American aid, and France’s role in Haiti’s independence. The Department of Art History and Archeology hosted a concurrent lecture centering another region of the world: the biennial Marjorie S. Venit Memorial Lecture in Ancient Mediterranean Art History and Archaeology. This year, it featured Dr. Robert Cohon of the University of Missouri-Kansas City and the Kansas City Art Institute, and explored the 20th century phenomenon of Italian forgers conning wealthy elites desperate to acquire art from the Roman Empire. 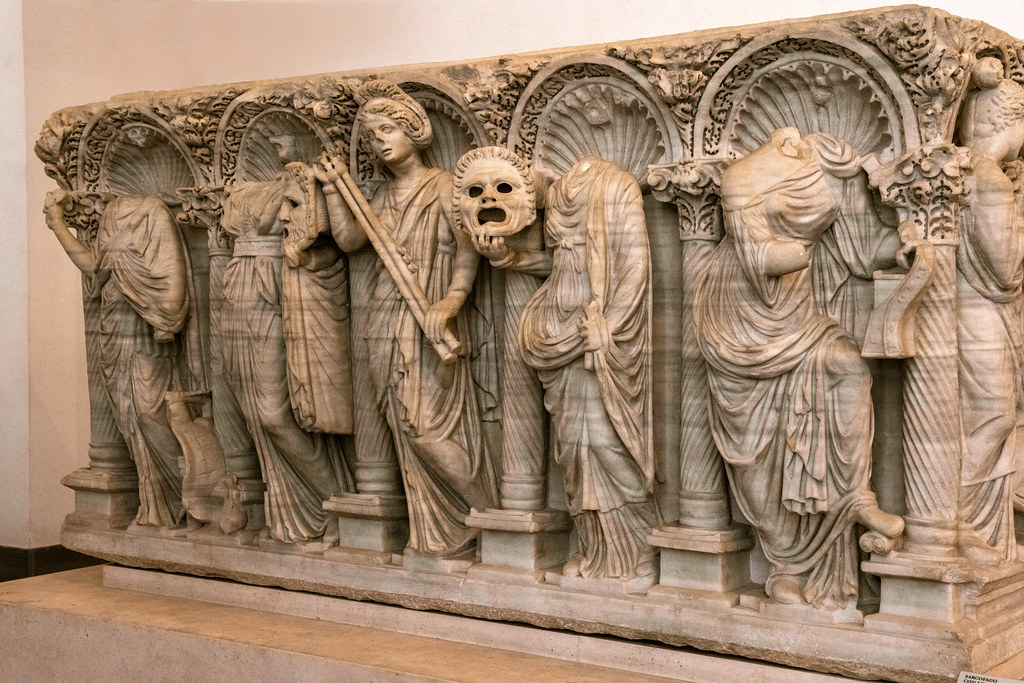 Tuesday’s events included a book talk hosted by the Gildenhorn Institute for Israel Studies with author Eliyana Adler discussing Survival on the Margins, an account of Polish refugees who fled to the Soviet Union in 1941. In the evening, International Student & Scholar Services (ISSS) sponsored a free screening of the award-winning Korean film Parasite in partnership with Student Entertainment Events (SEE), while the UMD Sustainable Ocean Alliance screened the Pixar animated film Luca. 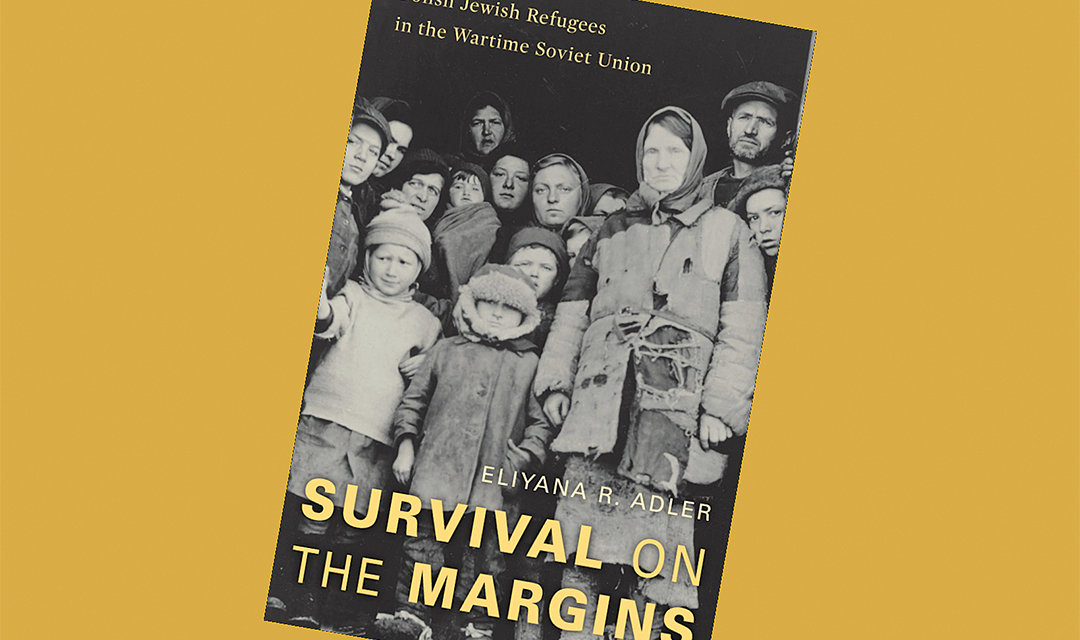 A recurring theme between the Office of International Affairs and the Smith School of Business during IEW was highlighting alumni voices in a global context. The Smith School held the panel “Global Competencies for the 21st Century Workplace” on Tuesday as part of their Distinguished Speakers in International Business Series, where four Smith alumni joined for a virtual dialogue on the value of appreciating cultural issues and developing cultural competence in today's business field. On Wednesday,  ISSS also hosted a virtual alumni panel, bringing together recently-graduated international students to offer their experiences and perspectives on securing full-time work.

The Smith School’s second Zoom panel of the week, “Passion for Diversity Dialogue Series: Black and Abroad,” brought Black alumni of the school to speak on their experiences working in global business—recognizing that colorism and racism can arise anywhere. The event was hosted by the Center for Global Business in collaboration with Smith’s MBA Association and the Black MBA Association.

“Cultivating relationships with partners around the world was integral to making sure that we could continue being successful and positively impact business,” said featured alumnus Maurice Nick. He was joined by speaker Jainaba Ceesay and moderator Rashida Petersen. 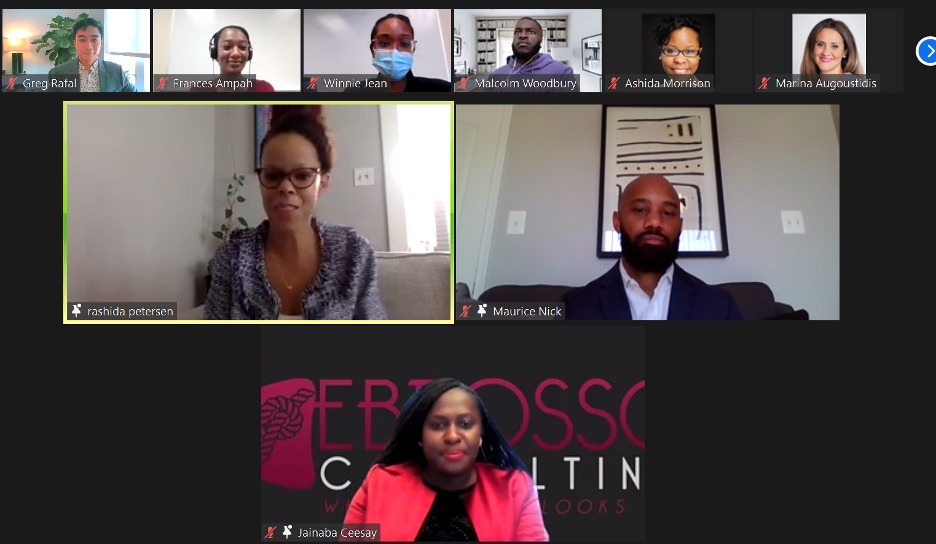 Smith alumni spoke on being Black in business / Courtesy of the Robert H. Smith School of Business

Wednesday also marked the latest installment in ISSS’ new Global Spotlight Series, which showcases research by UMD’s visiting international scholars. Dr. Sarah Gilbert, a postdoctoral associate from Canada at the UMD iSchool, shared insights from her work on the complexities of online community moderation and what needs to change.

“The current [moderation] models that we have… people are getting hurt because there's not enough moderation,” she explained. “It turns out that when you let people say whatever [they] want to, ...the light actually doesn't provide disinfectant for hate or disinformation.”

Gordon Peake, an affiliate of the Center for Australia, New Zealand and Pacific Studies at Georgetown University, spoke on Bougainville, Papua New Guinea at CISSM’s Global Forum. / Courtesy of CISSM

Thursday offered a collection of events spanning several regions of the world. The Center for International & Security Studies at Maryland (CISSM) held a Global Forum on the likelihood of Bougainville, Papua New Guinea becoming its own nation following an overwhelming vote for independence. The Latin American and Caribbean Studies Center (LACSC), which is working with the Office of International Affairs to introduce Global Classrooms courses into the LACSC curriculum, hosted the virtual international education exchange, “Afro-Mexican Identity in Vera Cruz and Costa Chica Regions, Mexico,” with Afro-Mexican scholar Sagrario Carretero-Cruz and Nancy Vera-Spack, a teaching fellow at the University of Tubingen in Germany.

That evening, the BAPS Campus Fellowship, a student group that serves to unite Hindu and Non-Hindu students at UMD, held a campus-wide celebration of Diwali.. The event was held in Stamp’s Grand Ballroom and focused on the practice of personal reflection alongside customary Diwali traditions such as rangoli sketching/painting. 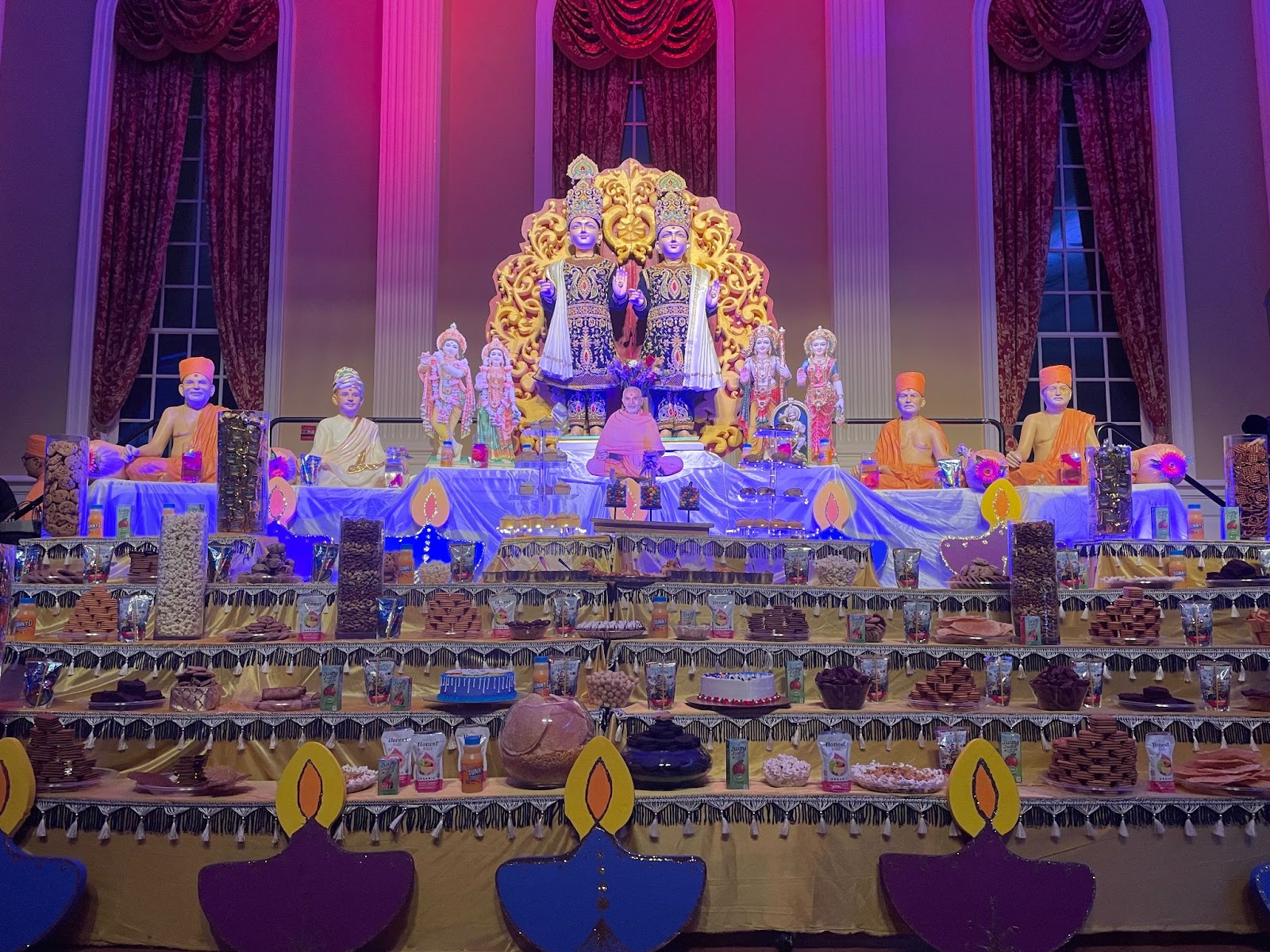 The Diwali celebration included the Annakut, or “mountain of food,” as a religious dedication. / Courtesy of Stories Beneath the Shell

IEW 2021 was capped with a reception for visiting Fulbright students, scholars and Fulbright alumni of UMD on Friday afternoon. Past and current Fulbrighters gathered in the Global Crossroads Atrium to enjoy refreshments and celebrate the 75th anniversary of the prestigious international educational exchange program.

Ongoing events beyond IEW held by the Office of International Affairs and its sub-offices include the weekly ISSS International Coffee Hour on Thursdays and Education Abroad’s Study Abroad 101 sessions.

If you’re already thinking of ways you can celebrate IEW at UMD next year, let us know at international-info@umd.edu so the Office of International Affairs can help you with promotion, or provide space for you to host your event. To stay informed of globally-focused events, news and opportunities year-round, students and faculty can sign up to receive the Global UMD newsletter.