By the Office of International Affairs

At “Immigration and the Rule of Law in the Trump Administration,” the first panel discussion for the University of Maryland’s #YearofImmigration and its annual Constitution Day event, students had the opportunity to hear from attorneys who are on the front lines of the legal battle taking place in U.S. immigration law. Across the many insights shared, one point made by Maureen Sweeney, associate professor and director of the Immigration Clinic at the University of Maryland Carey School of Law, became very clear:

“In reality, the political nature of the immigration issue often plays against any problem-solving that happens, and against any principles that we hold dear, like fairness and equal protection of minorities.” 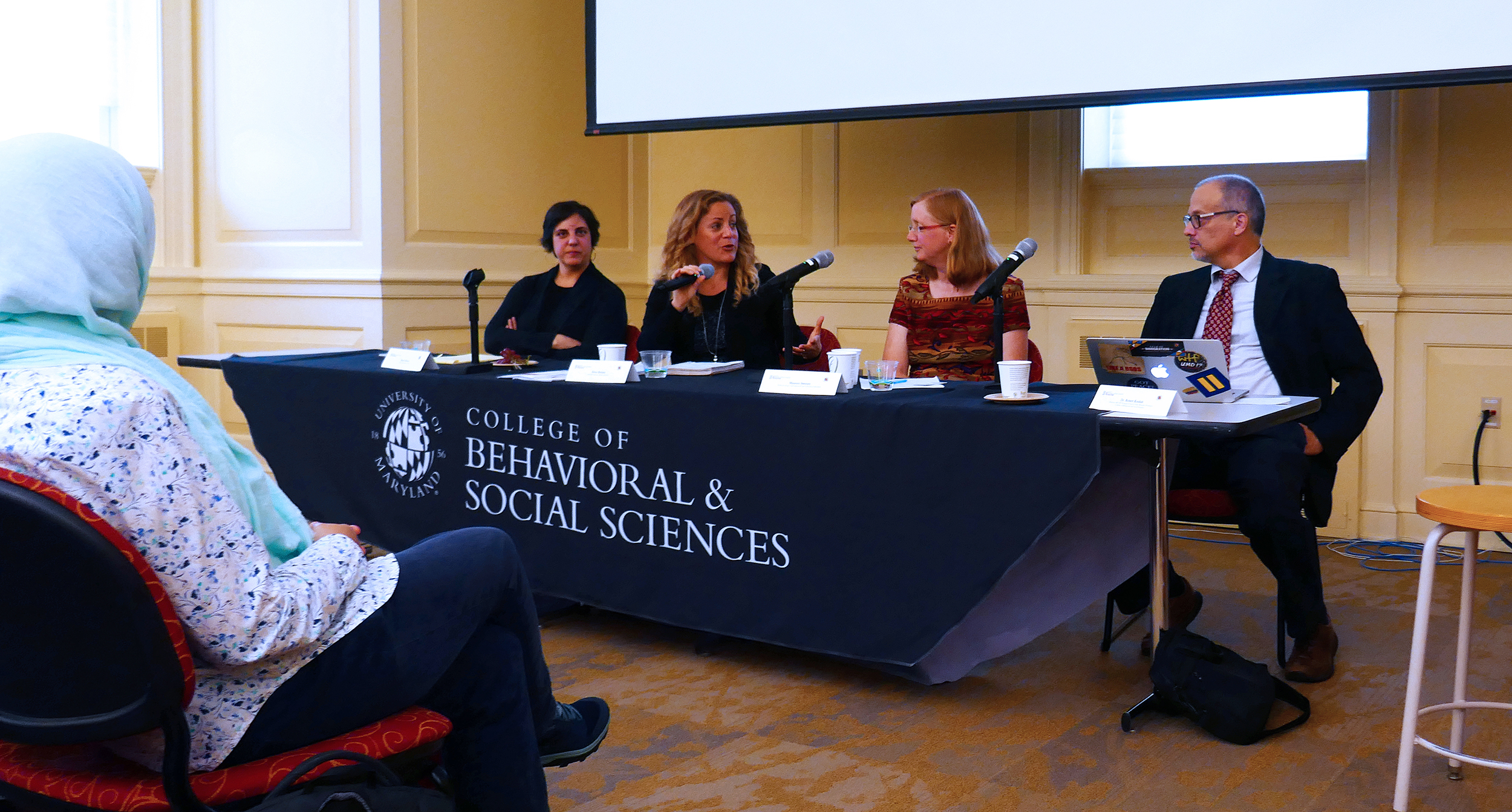 This challenge rises up time and again through the refugee and asylum cases brought to court by Sweeney and her co-speakers, Royce Murray, policy and media director at the American Immigration Council, and Sirine Shebaya, senior staff attorney for Muslim Advocates. The discussion was co-sponsored by the Office of International Affairs, and led by Professor Robert Koulish, Director of MLaw Programs, Joel J. Feller Research Professor at the College of Behavioral and Social Sciences, and Program Director for Justice and Legal Thought in the College Park Scholars Program.

Watch the full video of the conversation, or read on for of some of the lawyers’ most compelling points, gleaned from their work to help refugee clients seek asylum or resist deportation:

The Chinese Exclusion Act has a lot to answer for when it comes to current U.S. immigration laws.

When the U.S. Supreme Court issued its decision on the Chinese Exclusion Act, prohibiting all immigration of Chinese laborers in 1882, its decision was grounded in the government’s authority “in the inherent sovereignty of the nation,” and connected that law to foreign relations and to national security, Sweeney said.

From that decision, a series of cases flowed that established an “extreme deference to Congress and to the president when it comes to immigration matters,” she added. The act essentially said that the U.S. will “give special leeway to Congress and to the President because these are such difficult issues, and so we have this long history of case law that allows … all kinds of things that they would never get away with in other areas of the law, because it’s immigration.”

The majority of federal criminal prosecutions in the U.S. are for illegal entry and re-entry.

“Every other kind of criminal prosecution that the federal government does — drugs, weapons trafficking, white collar crime, etc. — all added together don’t add up to the prosecutions for immigration,” Sweeney said.

There is an unequivocal right in the U.S. to apply for asylum, including for those who seek to cross the U.S. border.

Refugees are “coming here for a range of reasons, but among them are those that are fleeing violence and persecution, and turning them away is illegal,” Murray said. ““At its core, the Constitution provides due process and equal protection to all people regardless of their citizenship. The Constitution could have specified that it only applied to citizens, and it did not.”

“The people coming to our border are asylum seekers,” Sweeney said. “And they have every right under U.S. law to seek asylum. Not just U.S. law, but international law, because that’s where our asylum law comes from. They have the right, absolutely, to make those claims.”

Congress has the power to stop the travel ban issued by the Administration for predominantly Muslim countries.

“The battle is not over,” said Shebaya, who has been working through Muslim Advocates to appeal President Trump’s travel ban. “We are still doing a round two of litigation around the implementation of the ban. But we also are still looking to Congress, which has the power to stop this ban from coming into effect. That doesn’t get talked about enough. … To the extent that Congress or the legislature changes, there are ways to make it so that even if there’s one person in the executive office that has decided to put in a policy that is anti-Muslim and anti-immigrant, that is not the end of the story. … It’s a co-equal effort between [the government’s] three branches.”

The U.S. is accepting a historically low number of refugees when the number of people displaced globally is reaching record highs.

In 2017, a record 68.5 million people were forced to flee their homes due to conflict, persecution and poverty.

“Despite the fact that we have record numbers of displaced people around the world, we are going to have record low numbers of refugee admissions in the coming year,” Murray said. “Now, it was already low from this past year. The administration had authorized for 45,000 refugees to be admitted, and…we’re on track to meet 22,000. For the decades in which we’ve had a refugee admissions program, we had been admitting on average 95,000 refugees per year. They announced [Sept. 17] that the goal for next year will be 30,000. If the actual admissions numbers keep pace with this past year, we’ll see many fewer actually admitted.”

For the full discussion, see the video below.